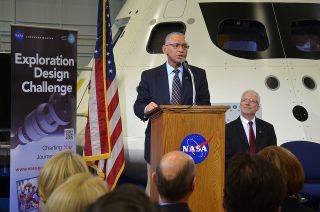 HOUSTON — NASA is challenging schoolchildren to protect their future ride into space.

"If not all of us, most of us remember the immortal words associated with the 1970 Apollo 13 mission, 'Houston, we have a problem," NASA Administrator Charles Bolden said, standing before a mockup of the agency's new Orion crew capsule. "Today, we are here to announce an effort in partnership with Lockheed Martin and the young people of America that will allow us to take about a year from now to proclaim, 'Houston, we have a solution.'"

Through teacher-led classroom activities and, for the older entrants, access to the resources to design and perhaps build and then fly into space a prototype radiation shield, students from across the nation will be able to contribute to the first flight of the Orion Multi-Purpose Crew Vehicle, the Exploration Flight Test (EFT-1), targetedfor launch in September 2014. [How NASA's 1st Orion Test Flight Works (Video)]

"When Orion takes its first flight in 2014, that's next year, it'll travel farther into space than any spacecraft developed for human spaceflight in the 40 years since our astronauts returned from the moon," Bolden said. "This will require new technologies, including new ways to keep astronauts safe from deep space radiation. That is the purpose of this challenge and we're excited that American students will be helping us solve that problem."

The EFT-1 mission will launch from Cape Canaveral, Fla., on a United Launch Alliance Delta 4-Heavy rocket, which will boost an unmanned Orion capsule on a two-orbit flight around the Earth. Once in space, the craft will rise to more than 3,600 miles (5,800 kilometers) above the planet — 15 times higher than the International Space Station— prior to turning around to come home to perform a high-energy test of its heat shield.

The elliptical orbit that the Orion will follow will result in the craft lingering in the Van Allen radiation belts surrounding the Earth. This trajectory will expose the vehicle to much higher levels of radiation than a typical low Earth orbit or even moon-bound mission would encounter.

The EFT-1 Orion will be equipped with a NASA-designed radiation sensor to measure the harsh space environment that the capsule will fly through. But it may be the student design for a radiation shield from the Exploration Design Challenge (or EDC) that offers the breakthrough technology for astronauts to follow on future missions.

"My guess is that we will see something we never thought about," Bolden told collectSPACE in an interview, referring to the outcome of the EDC. "It may be totally different and it may even be affordable, which is most important."

"So, it is my expectation that we will find something that we didn't think about," he said.

The design challenge is divided into three levels. For the first two groups, children in kindergarten through 4th grade and 5th through 8th grades, their teachers will lead them through studying the effects of radiation on human space travelers and analyzing materials that can simulate space radiation shielding for Orion. After participating in these activities, the students will recommend materials that best block harmful radiation.

At the high school level, grades 9 through 12, students will design the shielding to protect a sensor inside the Orion spacecraft from space radiation.

"There will be five teams chosen to test their designs in a virtual radiation simulator," said Leland Melvin, a space shuttle astronaut and NASA's associate administrator for education. "All five teams that are chosen will go down to Kennedy Space Center for the launch of EFT-1 and there will be a final down-select of the winning design that will possibly be flown on EFT-1."

"We're banking on this design because one of you, or one of our astronauts will be flying to Mars," he said. "We will be using space-certified radiation sensors sitting behind your radiation shield to see how effective it is working at blocking radiation."

"All of you who participate will be part of something that has never been done before, the first test flight of Orion," Marilyn Hewson, president and CEO of Lockheed Martin, said, addressing the students who attended the event on Monday and who were watching live on NASA's television channel.

Lockheed Martin is NASA's prime contractor for the Orion spacecraft and is building the capsule that will fly on EFT-1.

"Every journey starts with a single step and the Orion's Exploration Flight Test-1 is a significant first step toward deep-space human exploration," she said. "This mission will lay the foundation for future Orion flights and will take astronauts past the moon and on to asteroids and Mars."

All the students who take part in the design challenge will join the mission as "honorary crew members" by having their names flown aboard the Orion.

The winning team's status will be more than honorary — their radiation shield design may someday protect Orion's real crew members.

"You're about to embark on an amazing journey," Hewson said. "The skills you'll learn from this challenge — problem solving, critical thinking and systems engineering — are the very same skills that our engineers apply to our most challenging problems every day."

"You are taking on a mission that is hugely important — keeping our astronauts safe during a journey through deep space."