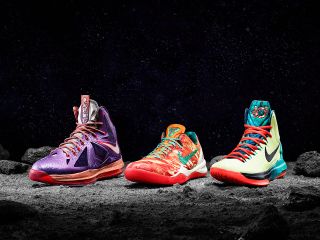 Houston, you've got a space shoe.

Nike has introduced a new set of colors and designs for its line of basketball sneakers sparked by the Texas city's space lineage.

Houston received the official nickname of "Space City" in 1967 because it is the heart of NASA's manned spaceflight program. The Johnson Space Center, which marked its 50th anniversary in 2011, has led crewed missions to the moon and International Space Station, and is home to the United States' astronaut corps.

"Space exploration defies practical reality. To launch into space on a mission to reveal the unknown can be mind- boggling," Nike stated on its website. "There is no limit to the potential for discovery. These unlimited barriers also apply to Nike Basketball's design philosophy — no limits, no restrictions, rooted in exploration and discovery." [Giant Leaps: Top Milestones of Human Spaceflight]

Working together as a team, Nike Basketball's color lead Eugene Rogers and graphic designer Erick Goto dove into Houston's connection to space exploration to create more than just a few new shoe designs. They also devised a basketball universe led by Nike's elite three players. James, Bryant and Durant appear in a distant universe, where players are not just stars — they come to life as fictional exoplanets on each of the three following shoes:

"It was an intricate, creative and fun project intended to celebrate the game's best," Nike wrote about the brightly colored shoes' design.

The space concept was also incorporated into select Nike Basketball apparel including the Nike Hyper Elite Galaxy shorts and a collection of three t-shirts for James, Bryant and Durant.

The three Nike Basketball shoes specially engineered for Houston — KOBE 8 SYSTEM, KD V and LEBRON X — went on sale Friday (Feb. 15) at select retail stores and online at Nike.com. The sneakers' introduction was timed to coincide with the 2013 NBA All-Star Game, which was played Sunday (Feb. 17) in Houston's Toyota Center.

The new Houston basketball collection is not the first time Nike has looked toward space explorationfor inspiration. Last February, the company introduced a "galactic theme" based on astronauts' spacesuits for James, Bryant and Durant. And in January 2010, Nike partnered with Apollo 11 moonwalker Buzz Aldrin to introduce the Rocket Hero Mavrk Mid 2 featuring an upper design based on photos taken by the astronaut while he was on the moon.