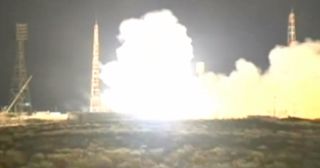 A Russian Soyuz rocket launched an unmanned cargo freighter to the International Space Station Monday (Feb. 11) to deliver nearly 3 tons of fresh food, water and equipment to the six men living on the orbiting outpost.

The robotic Progress 50 resupply ship and its Soyuz rocket lifted off at 9:41 a.m. EST (1441 GMT) from the Central Asian spaceport of Baikonur Cosmodrome, where it was late evening local time at the time of launch.

The Progress 50 cargo ship is flying on an accelerated schedule that will deliver it to the International Space Station in six hours, instead of the two days the unmanned cargo trips have traditionally taken for much of the space station's 13 years of crewed operation. Progress 50 is expected to arrive at the space station at 3:40 p.m. EST (2040 GMT) and park itself at a Russian docking port.

The Progress 50 spacecraft is packed with about 2.9 tons of supplies for the space station's six-man Expedition 34 crew. On Saturday, the station astronauts discarded an older unmanned cargo ship —called Progress 48 —in order to make room for Progress 50. The outgoing Progress vehicle was filled with tons of trash and unneeded items and intentionally destroyed by burning up in Earth's atmosphere. [Space Station's Robot Cargo Ship Fleet (Photos)]

The Russian Federal Space Agency's Progress spacecraft are disposable vehicles similar in design to its three-segment Soyuz crew capsules, but with a propellant module in place of the central crew return capsule on the Soyuz.

Progress vehicles are designed to be disposable and are intentionally destroyed by burning up in Earth's atmosphere at the end of their mission. Robotic resupply ships for the station built by Europe and Japan are also disposed of in the same way.

The only robotic supply ship for the space station that can return supplies back to Earth is the Dragon space capsule built by the private spaceflight company SpaceX. Dragon space capsules visited the space station twice in 2012, with the next one slated to launch from Florida atop SpaceX's Falcon 9 rocket in March. Dragon vehicles are equipped with a heat shield to protect them during re-entry and are built for ocean splashdown landings in order to return experiments and other gear to Earth.