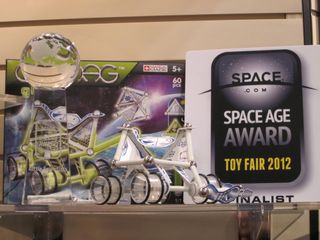 NEW YORK — The hottest new toys in the cosmos will be showcased at an international convention starting here on Sunday (Feb. 10), including lots of games and gizmos with a space flair.

The 110th American International Toy Fair exhibition runs from Feb. 10 to 13 at the Jacob K. Javits Convention Center in Manhattan. More than 1,000 toy makers from around the world, including Mattel Inc., Playmobil U.S.A. Inc., LEGO Systems, Inc., Crayola and Hasbro, Inc., will be showcasing their wares at the four day event, a hub for distributors, importers and retailers. The exhibition is open only to trade and media representatives.

We'll announce the recipients of our trophies Feb. 13 at the Toy Fair.