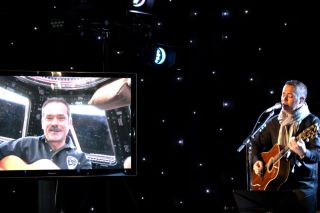 An astronaut and a rock singer recorded an original song together and released it today (Feb. 8) as the first duet of new music performed simultaneously in space and on the ground.

A rocket launch and the beauty of planet Earth are the subjects of the song, performed in space by Canadian astronaut Chris Hadfield, while accompanied by Canadian singer Ed Robertson of the band Barenaked Ladies, and others on Earth.

The song, called "I.S.S. (Is Somebody Singing)," focuses on the experience of a person in space missing his loved ones on the Earth below:

"If you could see our nation from the International Space Station, you'd know why I want to get back soon."

Hadfield and Robertson began co-writing the song when Hadfield was still in training in Russia for his five-month mission on the International Space Station. Next month, Hadfield will be the first Canadian commander on the orbiting complex when the Expedition 35 mission begins. [Astronaut Rock: NASA's Final Space Shuttle Wake Songs]

A duet from longtime friends

Hadfield and Robertson first met more than a decade ago when Hadfield gave the award-winning Barenaked Ladies band a tour of Mission Control in Houston.

The duet, mixed in Toronto earlier this week, included other members of the Barenaked Ladies as well as the Wexford Gleeks, a youth choir from the Wexford Collegiate School for the Arts. Hadfield performed from the cupola, which is an observation deck on the ISS.

"Welcome to the cupola. I'm ready to play a little music," Hadfield said, clutching a guitar, in a video of the song recording released today.

"Indeed. Your scenery looks a little nicer than ours," Robertson responded from the studio.

Hadfield then proudly showed off his guitar pick, to which Robertson quipped: "I know, yours matches your mission patch."

As the collaborators sang, Hadfield periodically looked up through the cupola windows to gaze at Earth. On one occasion, he did so right after singing, "Pushed back in my seat, look out my window – there goes home."

Despite the great distance between the collaborators, Robertson wrote that the work of writing the song mostly went smoothly between himself and the orbiting astronaut. The exception came when they were finalizing the chorus.

"It’s a line in the chorus that I wrote, 'If you could see our nation from the International Space Station.' Chris always felt that it was a real mouthful, and it is a real mouthful, but that’s what’s cool about it," wrote Robertson on a blog for the Canadian Broadcasting Corp., Canada's national broadcaster.

'Chris always felt that it was a real mouthful'

"His alternate was 'From way up here on this space station.' So I said, 'You just sung the exact same number of syllables and haven't changed the meaning of it. You just didn’t say 'International Space Station', which is this awesome place where you actually are, so I really want you to sing that line."

Hadfield is reportedly working on making enough songs for an album — in between his other duties on station. He released another original song from orbit in December called "Jewel in the Night."

When the album is released, Robertson already has a suggested title for Hadfield.

"How about, 'Turns Out in Space Lots of People Can Hear You Scream?'" he offered.

Hadfield isn't the first musical astronaut to perform on the space station. In April 2011, NASA astronaut Cady Coleman collaborated with Jethro Tull's Ian Anderson on the ground to play the band's song "Bourree" over a satellite connection. Coleman played the flute during the performance, which commemorated the 50th anniversary of humanity's first spaceflight by Yuri Gagarin on April 12, 1961.

You can listen to Hadfield and Robertson's space song here: