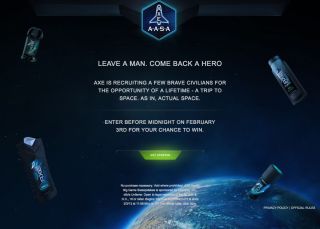 The men's personal care product company AXE has teamed up with famed moonwalker Buzz Aldrin to send 22 people into space, and make sure they smell nice doing it.

The company today (Jan. 9) kicked off its new AXE Apollo Space Academy, an online contest that promises to send 22 winners to the edge of space and back aboard a private spaceship. The winning space travelers will launch aboard a suborbital Lynx space plane built by the U.S. company XCOR Aerospace and operated by the tourism firm Space Expedition Curacao, AXE officials said.

"Space travel for everyone is the next frontier in the human experience," Buzz Aldrin, who became the second person ever to walk on the moon during NASA's 1969 Apollo 11 mission in 1969, said in a statement. "I'm thrilled that AXE is giving the young people of today such an extraordinary opportunity to experience some of what I've encountered in space."

The contest is open to men and women in more than 60 countries who sign up on the AXE Apollo Space Academy website (AXEApollo.com) and write about why they should be chosen to fly in space, while others will vote on the entries. The deadline to enter is Feb. 3. [How Lynx Spaceships Will Launch (Video)]

The 22 winners will be selected during the AXE Global Space Camp in Orlando, Fla., which will feature competitive "space-simulation challenges," AXE officials said.

Winning space travelers will fly, one at a time, aboard Lynx space planes once Space Expedition Curacao begins operational flights. The reusable space planes are designed to fly two people — one pilot and a passenger — to an altitude of 62 miles (100 kilometers) during suborbital flights. The rocket plane is built to take off and land horizontally on a runway.

Space Expedition Curacao will oversee commercial Lynx flights from the Caribbean island of Curacao. Tickets for a flight are set at $95,000.

XCOR Aerospace is expected to begin the first test flights of a high-altitude Lynx design sometime later this year. The first passenger flights could begin in 2014.

AXE's deodorant body sprays are apparently known as Lynx in some parts of the world, so booking seats on a space plane with the same name was no giant leap, company officials explained.

"The AXE Apollo launch is the biggest and most ambitious in the AXE brand's 30-year history," AXE's global vice president Tomas Marcenaro said. "For the first time, we're simultaneously launching one global competition in over 60 countries offering millions of people the opportunity to win the most epic prize on Earth. A trip to space — yes, actual space."