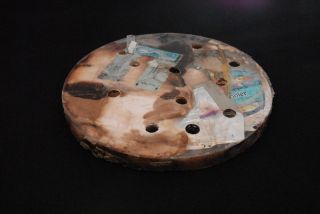 A disc produced by heating and compressing a sample of trash simulants. The discs are being tested for various conditions and the discs could be used in space to create radiation shields or for other tasks.
(Image: © NASA)

Humans produce trash just about everywhere they go, including space, which will pose a problem for astronauts on long voyages to other planets. But scientists have found a way to transform this space detritus into something useful: a radiation shield.

Since flinging garbage out the door is not an option, engineers at NASA are testing how a novel on-board trash compactor could give new life to discarded water bottles, clothing scraps, duct tape and other waste on deep-space missions.

The space trash compactor is not like the giant one on the Death Star that nearly squashed Luke Skywalker and the gang in the first "Star Wars" film. This one is smaller, producing circular tiles of trash 8 inches (20 centimeters) wide and a half-inch (1.3 cm) from a single day's worth of garbage. The discs then could be stowed away, or even used for radiation shielding to protect a spacecraft’s crew, NASA officials said.

"One of the ways these discs could be re-used is as a radiation shield because there's a lot of plastic packaging in the trash," Mary Hummerick, a Qinetiq North America microbiologist at Kennedy Space Center in Florida working on the project, said in a statement. "The idea is to make these tiles, and, if the plastic components are high enough, they could actually shield radiation."

Beyond low-Earth orbit, astronauts are bombarded with harmful cosmic rays, which can boost the risk of certain diseases like cancer and neurological damage. And the longer one spends in space, the greater the risk. The dangers radiation are especially of concern given NASA’s plans for a manned mission to an asteroid by 2025, and then on to Mars by the mid 2030s — the round trip to the Red Planet alone could take at least two years.

Trash tiles could, for example, bolster the space radiation shielding around the astronauts' sleeping quarters or perhaps a small area in the spacecraft that would be built up to serve as a storm shelter to protect crews from solar flare effects, NASA officials said.

Devised by engineers at NASA’s Ames Research Center in California, the compactor heats the trash for 3.5 hours to between 300 and 350 degrees Fahrenheit (148 and 176 degrees Celsius), melting the garbage, but not incinerating it. The process reduces the trash by at least 10 times the original size and squeezes out water that could be recycled.

Hummerick said strips containing bacterial spores are being embedded in test tiles to see if the heating and compaction process is effective in killing bacteria. Her team at Kennedy is expecting to get back a new batch of compacted tiles from Ames soon and will next test if the discs remain sterile in long-term storage.

"They are achieving sterilization for the most part," Hummerick said. "What we don't know is, can a few possible surviving bacteria go inert and then grow back?"

NASA mission planners need to think about how to handle trash to make use of limited resources during long journeys and to prevent spacecraft from becoming filled with garbage. Trashed tossed out of a spaceship could potentially threaten to contaminate other worlds, and NASA policy dictates that such pollution should be avoided.