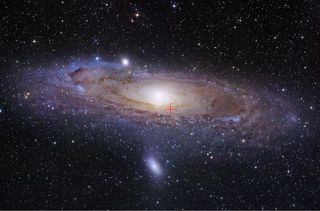 The brightest objects in the universe are called quasars, and now astronomers have found the first miniature version of a quasar beyond the Milky Way.

Quasars are supermassive black holes up to billions of times the mass of the sun that release extraordinarily large amounts of light as they rip apart stars and gobble matter.

The newfound "microquasar" is a similar object, just smaller. Analyzing how this luminous monster is ripping apart a star could help shed light on the mysteries surrounding black holes, scientists said.

In 1994, astronomers discovered the first microquasars, which are black holes several times the mass of the sun. As they devour material from a companion star, the matter they pull off forms rapidly spinning disks around the microquasars that become hot enough to emit X-rays. These disks also spit out narrow jets of energetic particles that fly at nearly the speed of light and generate strong bursts of radio emissions. [Photos: Black Holes of the Universe]

Until now, the four known microquasars were all located within our Milky Way galaxy.

"Obscuration within our galaxy makes it difficult to study the disks of these microquasars," said study lead author Matthew Middleton, an astrophysicist at the Astronomical Institute Anton Pannekoek in Amsterdam.

Now, an international team of scientists has discovered the first microquasar outside the Milky Way, 2.5 million light-years from Earth in the Andromeda Galaxy.

"Finding one in a neighboring galaxy means we probably can find many more, thus helping our efforts to better understand their physics," Middleton explained.

Specifically, the investigators saw that radio emissions from XMMU J004243.6+412519 dropped by half in just 30 minutes.

"This tells us that the region producing radio waves is extremely small in size, no farther across than the distance between Jupiter and the sun," said study author James Miller-Jones at the Curtin University node of the International Center for Radio Astronomy Research in Perth, Australia. This is "a dead giveaway" that ultraluminous X-ray sources "are just normal, everyday black holes," Miller-Jones said.

"Our observations tell us that this ultraluminous X-ray source — and by extension, many others — is just a run-of-the-mill black hole, only about 10 times the mass of the sun, that is swallowing material as fast as it can," Middleton said. The scientists estimate that its companion is a middle-sized, rather than a giant, star.

The microquasar brightened and faded over the course of six months as it gorged on its companion star.

"We watched a black hole go from nibbling daintily at an appetizer to binging on the main course, and then gradually slowing down over dessert," Middleton said.

At its peak, the researchers estimate the microquasar devoured matter at a rate of about 10 trillion tons — about 25 times the mass of all the people on Earth — per second. This rate is close to a theoretical maximum known as the Eddington limit.

"Understanding how these things work is important, because we think quasars played a big role in redistributing matter and energy when the universe was very young," Middleton said.

"The next logical step is to search nearby galaxies for more of these sources," Middleton added.

The scientists detailed their findings online today (Dec. 12) in the journal Nature.