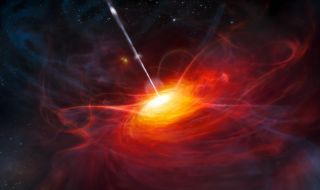 This artist's impression shows how ULAS J1120+0641, a very distant quasar powered by a black hole with a mass 2 billion times that of the sun, may have looked. This quasar is the most distant yet found and is also the brightest object yet discovered in the early universe.
(Image: © ESO/M. Kornmesser)

Scientists have discovered the most brilliant object yet from the infancy of the cosmos, a super-bright galaxy that challenges notions of how extraordinarily massive black holes evolved.

The brilliant enigma is a quasar, a stage that some galaxies go through when lots of material falls into the supermassive black holes at their cores, giving off light as it does so.

The quasar, assigned the name ULAS J1120+0641, is the most distant one found to date. It is by far the brightest object discovered from the early universe, giving off 60 trillion times as much light as our sun. (A trillion is 1 million millions.)

To discover this quasar, scientists hunted through 20 million objects detected over the course of five years in the United Kingdom Infrared Telescope Deep Sky Survey. [The Strangest Things in Space]

"The search was very long and slow — kind of like panning for gold and seeing lots of shiny things glinting in the pan, only for most of them to be old nails, until finally one candidate turned out to be what we were looking for," said researcher Daniel Mortlock, an astrophysicist at Imperial College London.

Most distant quasar yet

The distance to the quasar was then determined from observations made with the European Southern Observatory's Very Large Telescope and the Gemini North Telescope. Based on how greatly the light from the quasar was stretched during its journey by the expansion of the universe, the scientists estimate the quasar existed only 770 million years after the Big Bang.

By analyzing the light from ULAS J1120+0641, researchers estimate the quasar was powered by a black hole 2 billion times the mass of the sun. How black holes became so massive so soon after the Big Bang is difficult to explain.

"While it's not the most massive quasar black hole known, it is seen so much earlier than the others that it is even harder to form in the time available," Mortlock told SPACE.com.

A number of theories that scientists have brought up to explain this anomaly include: the existence in the early universe of  "seed" black holes having up to 1,000 times our sun's mass; a high rate of black hole mergers; and the growth of black holes unaccompanied by much of the light given off by in-falling material, thus hiding the growth process.

While this quasar adds to the mystery of these early massive black holes, it could help solve another enigma from the earliest times of the universe's estimated13.7 billion years: a stage known as reionization.

The next step is to find quasars as old or even older. "This should be done by surveys which are just starting now, such as the Visible and Infrared Survey Telescope for Astronomy (VISTA) and Panoramic Survey Telescope and Rapid Response System (Pan-STARRS) that are already under way," Mortlock said.

The scientists detailed their findings in the June 30 issue of the journal Nature.