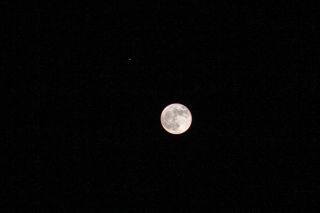 Jupiter and the moon appear in conjunction in this photo. Victor Rogus took this image from Jadwin, Missouri on Nov. 28, 2012. He used a Carl Zeiss 50mm lens at f8, ISO 320, and a 1/640 second exposure, Cannon 60Da camera, astrophotography model, to capture this image.
(Image: © Victor Rogus)

The moon and mighty Jupiter appear in conjunction in these stunning night sky photos.

Victor Rogus took these images from Jadwin, Missouri on Nov. 28.

"I live for this stuff and, clouds permitting, I am always out there trying to document these events," Rogus wrote in an email.

When the moon and Jupiter are observed from different locations on Earth, the distance between the two orbs appears to change. The apparent location of the moon relative to Jupiter depends on where the viewer is because of a phenomenon called parallax.

Parallax is the difference in the apparent position of an object when viewed from two different sightlines. The revolution of the moon around our planet and of Jupiter around the sun also creates differing scenes from different viewpoints on Earth.

To capture the first image, Rogus used a Carl Zeiss 50mm lens at f8, ISO 320, and a 1/640 second exposure, on a Cannon 60Da camera, astrophotography model.

Rogus intentionally over-exposed the second image to capture three of Jupiter's Galilean moons.  He zoomed in using a Baader Planetarium Vario-finder (61mm x 250mm) as a lens at f4.1, with exposure time 0"4 of a second and ISO at 200.

Editor's note: If you have an amazing skywatching photo you'd like to share for a possible story or image gallery, please send it to spacephotos@space.com.