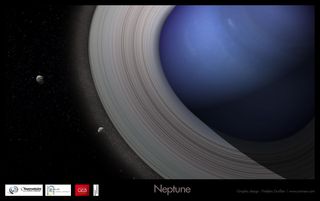 Enormous rings may have graced many of the planets in the early solar system, giving rise to the moons that circle them today, scientists say.

A new computer model suggests that the natural satellites of planets in our solar system may have formed from rings of matter, rather than from the clouds of gas currently thought to have created them.

Scientists think moons around planets formed in one of three ways: by a colossal impact, by capture, or alongside their planet. But two French researchers, Aurélien Crida of Université de Nice Sophia-Antipolis and Sébastien Charnoz of Université Paris Diderot, propose a fourth model: that the moons formed from rings of solid material much like the dazzling rings of Saturn.

Ring around the planet

In the chaotic early solar system, a giant asteroid or passing protoplanet could easily become a captured moon. But if the orbits came too close, it might instead collide with the newborn planet, scooping out material that would form a new satellite. [Photos: Saturn's Glorious Rings in Pictures]

Another option was open to the massive gas giants. After the birth of the sun, planets formed in the remaining gas. The disks of gas around Jupiter, Saturn, Uranus, and Neptune may have formed smaller satellites at about the same time as the planets.

One of the problems with this model, however, is the location and lineup of the moons. In most actual cases, the satellites grow larger the farther they are from their parent planet, and the moons are farther away than can be accounted for.

According to the French researchers' model, the early solar system could have been populated by ringed planets. Saturn's early rings may have been more than 5,000 times as massive as the ones visible today. Neptune would have looked much like a modern Saturn, with rings twice as massive, while Uranus could have captured enough particles to form rings about 400 times larger than the ones Saturn currently has.

The rings could have formed in a variety of ways. A large body crashing into the young planet could have resulted in a significant amount of debris left orbiting the planet. Such might be the case for Earth, where scientists already think that a large body colliding with the planet early in its life may have ejected material that went on to create the moon.

Crida points out that this is in line with the model he and Charnoz propose. Instead of the material immediately coalescing into a satellite, however, he suggests that a ring could have come first. [How the Moon Evolved: A Video Tour]

"People didn't question how this material will form the moon," he told SPACE.com by email. "Our model describes the spreading of the ring created by the impact, and the formation of the moon."

The research was published today (Nov. 29) in the online version of the journal Science.

According to the new model, the rings of rock and dust around the planet would slowly travel outward. Close to the planet, the pull of gravity would keep the material from pulling together into a larger body.

At a critical distance known as the Roche limit, the gravity between the bits of dust and rock becomes more powerful than the gravity exerted by the planet. It is here that the moons begin to form.

The first moon would have clumped together at the edge of the Roche limit, pulling in pieces of rock and dust as it spirals away from the planet. Another small body might form, but the more massive moon would consume it.

"The edge of the rings is the moon's feeding zone," Crida said.

"When the moon migrates away so far that the outer edge of the rings is not in its feeding zone anymore, a new moon forms at the Roche limit."

Exceptions to the rule

Crida noted that not all of the moons in the solar system fit in with the new model. Iapetus and Titan, the massive moons of Saturn, could have formed in the gas disk around the young planet. After a few million years, the gas would have dissipated, leaving the rings to form the remaining smaller moons.

The planet Jupiter is another exception to the model. In Jupiter's alignment of satellites, the moons do not grow smaller the farther they are from the planet.

"It is not absurd to consider that they formed via another process," Crida said. "Maybe Jupiter never had rings."

He notes that the most massive planet in the solar system was also the first to cut a path through the disk of gas orbiting the sun and to boast its own disk. These unique points may have allowed the moons to form within the gas around the giant planet.

Earth's moon likely formed from an impact in the early solar system.

"But all giant impacts don't give birth to rings," Crida said. "Maybe this never happened at Venus and Mercury."