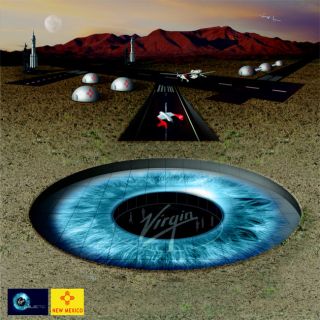 Thefirst purpose-built commercial spaceport for the personal spaceflightindustry is to be constructed in New Mexico, a deal struck between the stateand Virgin Galactic, the private spaceline firm created by British billionaire,Sir Richard Branson.

Richardson announced that hewill work with the state legislature to secure a three year commitment for atotal of $100 million for the state's share of the funding to build the world'sfirst commercial spaceport to be built in southern New Mexico.

RickHomans, New Mexico Spaceport Authority Chairman and New Mexico Economic DevelopmentDepartment Secretary said that construction of the spaceport will begin asearly as 2007 and be completed by 2009 or 2010.

Bransonexplained that with the historic partnership, "New Mexico will be known aroundthe world as the launch pad of the new space industry." He said that within afew years "we intend to take two to three flights a day to space from New Mexico."

"We'regoing where no one has gone before. There's no model to follow, nothing tocopy. That is what makes this so exciting," Branson explained. "We might evenbe able to allow those aliens who landed at Roswell 50 years ago in a UFO achance to go home."

Whitehornsaid that it has taken governments four decades to get 500 people to space. "Wehope to do that in year one...and eventually be carrying up to 10,000 people ayear by the later years of the project," he said.

Priorto commercial space treks from New Mexico, Whitehorn said that Mojave, California is the site for an extensive test program of some 50 to 60 flights ofSpaceShipTwo. That craft is now under development by aerospace designer, BurtRutan and his team at Scaled Composites based in Mojave, California.

Currentconceptual views of the spaceport, Whitehorn said, are tied to making it "themost environmentally-friendly spaceport/airport type structure that's beenbuilt." Largely to be fabricated underground, the New Mexico spaceport, forexample, would use solar energy and an advanced water collection system.

Spotlightingthe natural beauty of New Mexico, Whitehorn said that spaceport facilities willbe underground as much as possible, "actually hidden from the ground, butvisible when you're in space and coming back to the Earth."

"Iam thrilled about the first Virgin Galactic civilian flight scheduled for 2008and I look forward to being on it," Principal told the audience. "We're on anera of a new form of transportation and a way of life that we've never knownbefore," she said.

In a statement from Rutan's Scaled Composites today, thegroup congratulated Virgin and New Mexico on their spaceport plans.

In July, Branson and Rutanannounced their signing of an agreement to form The Spaceship Company to builda fleet of commercial suborbital spaceships and launch aircraft.

Scaled'sdevelopment work on the commercial suborbital spaceliner design will beperformed in its current Mojave, California facilities. The SpaceshipCompany production is also planned to take place at the Mojave Spaceport.

"We're thrilled thatGovernor Richardson was able to bring Virgin Galactic to Southern New Mexico.We also want to congratulate Richard Branson for making an excellentchoice. New Mexico has the real-estate, the air space and most of all thepolitical will to be a great home for Virgin Galactic," said Peter Diamandis,Chairman and Chief Executive Officer for the X Prize Foundation, based in Santa Monica , California.

Diamandis told SPACE.comin an earlier interview that the concept of the X Prize Cup was to create a"nest" that will attract multiple companies and build a core industry. Thatvision is coming to fruition, he added.

"Withcompanies like Virgin and Starchaser landing in New Mexico, and the finals ofthe Rocket Racing League, we're getting the commercial critical mass for thepersonal spaceflight industry needed to make it successful," Diamandis said.

Diamandissuggested that the analog to what is taking place in New Mexico is automotiveracing.

"Indianapolis was able to attract the Indianapolis 500, and the motor speedway and nowthere are hundreds of related corporations from the racing teams themselves, toengine manufacturers and merchandise companies," Diamandis noted. "The X PrizeCup vision is to do the same in Southern New Mexico."

MichaelKelly, Vice President of Operations for the X Prize Foundation called theBranson tie to the New Mexico spaceport a "fascinating turn of events."

Kellysaid that about two years before Dennis Tito footed the bill on his personalflight to the International Space Station via a Russian Soyuz, it becameapparent that the first market for spaceships was going to be suborbital spacetourism.

"Atthat time, the Ansari X Prize seemed as if it may be the catalyst," Kelly told SPACE.comprior to today's announcement. "Both prognostications have come true. It'snot a surprise, but it is still almost incredible that all of this isfinally happening," he emphasized.

Kellysaid that kudos go to Branson for his vision...and willingness to put that visioninto action. "I also applaud his choice of location. We also believe that New Mexico is the jumping-off point to the first great wave of personal spaceflight," hesaid.