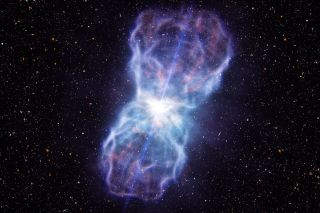 Astronomers have seen a distant galaxy that blasts away material with two trillion times the energy the sun emits — the biggest such eruption ever seen. That ejection of matter could answer an important question about the universe: why are the black holes in the centers of galaxies so light?

Computer models of the early universe usually produce a virtual cosmos that looks like ours except for one thing. The ratio of the mass of black holes in galaxy centers to the rest of the matter in galaxies is larger in the simulations than in the real universe.

Scientists think somehow galaxies are ridding themselves of much of the mass that would have ended up falling into their central black holes. However, until now researchers have been at a lack for an explanation of how this might happen.

To expel matter from galaxies takes energy. "We needed some input of energy from supermassive black holes," Nahum Arav, an astrophysicist at Virginia Tech told SPACE.com.

Supermassive black holes are obvious candidates, because they are the most energetic objects known. Some galaxies containing active black holes, called quasars, shine more brightly than anything else in the universe. "Our simulations showed that if we allowed the quasar to release a lot of mechanical energy, then the masses of galaxies would match observations," Arav said.

Arav led a team that observed a quasar, called SDSS J1106+1939, which dates back to when the universe was only 3 billion years old (it is now about 13.7 billion years of age). Most quasars are millions or even billions of light-years distant, which means we see them as they were long ago. As such, they offer a unique window back in time, to when galaxies were young.

The researchers used an instrument called a spectrometer, which spreads light out into its constituent wavelengths, attached to the European Southern Observatory's Very Large Telescope in Chile. This instrument revealed a giant cloud of hot, ionized gas that was blasted away from the galaxy at nearly 5,000 miles per second (8,000 kilometers per second), or about 2.6 percent the speed of light. The gas is mostly hydrogen with some helium and traces of other elements such as carbon. [Most Powerful Black Hole Quasar Discovered (Video)]

The energy needed to fire that blast is five times greater than any other quasar has displayed to date.

The sheer size of this ejection demonstrates a way for young galaxies to off-load mass: The energy in a quasar we usually see as radiation can be turned into kinetic energy, or energy of motion. This eruption is throwing up some 400 times the mass of the sun every year, and such events last for anywhere from 10 million to 100 million years.

That, Arav said, could be the key to why galaxies are generally less massive than they should be, and why the black holes at their centers are the sizes that they are. "It gives the theorists something to work with," he said.

Arav said the exact mechanism for these mass ejections still isn't clear, and his own observations don't yet point to what it might be. Future work might enable astronomers and cosmologists to build hypotheses.

Saavik Ford, an associate professor of astronomy at Bronx Manhattan Community College and research associate at the American Museum of Natural History, said that if this phenomenon proves to be common, then it could also help answer a lot of other questions. One is why there some clusters of galaxies are embedded in gas radiating X-rays, which would require some source of energy. The finding could also help astronomers understand why star formation in some massive elliptical galaxies seems to stop when it does.

But the discovery isn't a clear-cut smoking gun. Arav said he wants to do more observations and see if he and his colleagues can't find more quasars like this one. If not, or if such outflows are more rare, then there is some other phenomenon at work. "I hope in two years to have a nice sample of about 10," he said.

The new observations will appear in a paper led by Benoit Borguet of Virginia Tech, to be published in an upcoming issue of The Astrophysical Journal.