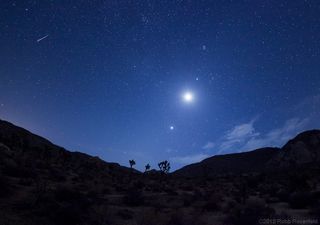 Night sky watcher Robb Rosenfeld took this photograph of a Perseid meteor with Venus, Jupiter, and the moon. He took the photos on August 12, 2012, in Joshua Tree National Park, located in southern California east of Los Angeles.
(Image: © Robb Rosenfeld)

The brightest planet in the sky, Venus is the closest to Earth. Its shining presence as it hovered near the sun earned it the nickname of both the morning and the evening star, depending on its location within its orbit. Let's take a look at just how far the distance to Venus is.

How far is Venus from Earth?

Venus is the closest planet to Earth (it's also the most similar in size). But its proximity to our planet depends on the orbits of both. The two planets travel in ellipses around the sun, and so the distance between them is constantly shifting. At its farthest, Venus lies 162 million miles (261 million kilometers) away, according to NASA.

Venus takes 224.7 Earth days to travel around the sun. It makes its closest approach to Earth about once every 584 days, when the planets catch up to one another. On average, it is 25 million miles (40 million km) away at this point, though it can reach as close as 24 million miles (38 million km).

How far is Venus from the sun?

Venus isn't the brightest planet in the sky because it is the closest to the sun; Mercury bears that honor. But unlike Mercury, Venus has a thick, cloudy atmosphere that reflects the light better than Mercury's rocky surface (it also keeps the planet piping hot). This causes it to stand out, brighter than any star even at its dimmest.

When Italian astronomer Galileo Galilei studied Venus with a telescope, he was astonished to find that it had phases. Like the moon, these phases depended on where the planet and the sun lay in relationship to the Earth. The phases of Venus were used as evidence that Venus, like the other planets, orbited the sun rather than the Earth in the Copernican model of the solar system.

Because Venus lies inside of the orbit of the Earth, it periodically transits, or crosses, the sun, blocking out a portion of the star. If the planets traveled within the same plane of the solar system, this would happen on a frequent basis. Instead, Venus has an orbit that is inclined by 3.4 degrees with respect to Earth, so sometimes it tends to pass outside of the range.

Transits occur in pairs every 243 years; the pairs are separated by eight years. The last transit of the 21st century occurred on June 5 and 6, 2012 (its partner passing took place in 2004). Other transits occurred in 1639 (the first one scientifically observed; its companion transit was missed), 1761 and 1769, and 1874 and 1882. Ancient cultures such as the Greeks, the Mayans, and the Chinese charted the motion of Venus, but records indicate no clues as to transits. [PHOTOS: Transit of Venus 2012 in Pictures]

Combining information about Venus' 1639 transit with the principle of parallax allowed for the most accurate estimates of the distance from the Earth to the sun at the time.

How long does it take to get to Venus?

The time it takes to travel to Venus depends not only on what speed a rocket can obtain but also on the path a spacecraft travels. Space agencies frequently use gravity boosts from moons, the sun, and other planets to accelerate a craft without using fuel.

In 1962, NASA's Mariner 2 became the first spacecraft to send back information from another planet. Launched on August 27, 1962, it performed a flyby of the planet on Dec. 14, having taken less than four months to reach Venus.

The Soviet Union launched Venera 7 on Aug. 17, 1970. On Dec. 15 of that same year, it landed on Venus and became the first spacecraft to send back information from another planet. It took slightly more time to reach Venus than Mariner 2, but still fell short of the four-month mark.

The most recent terrestrial visitor to Venus was NASA's Magellan spacecraft, which took up orbit around the shining planet. Launched on May 4, 1989, it began its orbital insertion movement on Aug. 7, 1990, having taken a more roundabout trip after scheduling issues following the Challenger disaster. Magellan mapped the surface of Venus in depth.