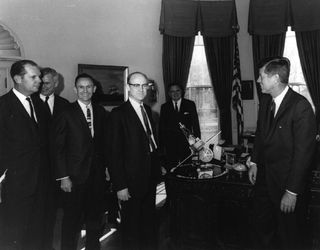 President Kennedy is presented with a model of the Mariner 2.
(Image: © NASA.)

The Mariner 2 probe flew by Venus in 1962 after the failure of Mariner 1, sending back data on its atmosphere, mass, and weather patterns. It stopped transmitting in 1963 after delivering a wealth of scientific information.