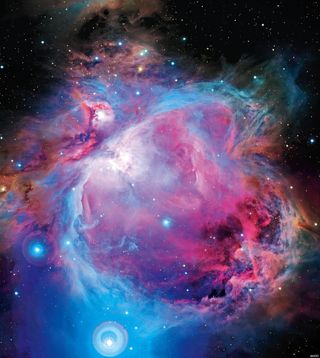 Once thought to be part of the Orion nebula, the star cluster NGC 1980 is actually a separate entity, scientists say. It appears around the brightest star seen at the bottom of this image, iota Ori. The disks around the star are the result of internal light reflection in the camera optics.
(Image: © © CFHT/Coelum (J.-C. Cuillandre & G. Anselmi))

A star cluster once thought to be part of the spectacular Orion Nebula is actually a separate celestial entity parked in front of the nebula, a new study reveals.

Scientists using the Canada-France-Hawaii Telescope in Hawaii found that the star cluster NGC 1980 is a distinct, massive bunch of stars in front of the Orion nebula, which at a range of 1,500 light-years is Earth's closest known star factory. The cluster is huddled unevenly around the star iota Ori at the southern tip of the sword in the famed Orion constellation.

"For me the most intriguing part is that the older sibling, the iota Ori cluster, is so close to the younger cluster still forming stars inside the Orion nebula," study researcher João Alves, of the University of Vienna, said in a statement.

Alves and his colleagues combined observations of the Orion nebula by the MegaCam imager on the Canada-France-Hawaii Telescope with past studies using ground-based and space observatories to make the discovery. [Gallery: The Splendor of the Orion Nebula]

"It is hard to see how these new observations fit into any existing theoretical model of cluster formation, and that is exciting because it suggests we might be missing something fundamental," Alves added. "Clusters are very likely the favorite mode of star formation in the Universe, but we are still far from understanding why that is exactly."

Alves's colleague and co-author of the study, Hervé Bouy, of the European Space Astronomy Centre in Madrid, said follow-up studies are needed to unpack the secrets of these star clusters.

"We must untangle these two mixed populations, star by star, if we are to understand the region, and star formation in clusters, and even the early stages of planet formation," Bouy said in a statement.

The imaging techniques used to study the newly identified cluster combined optical, infrared and mid-infrared data and helped ensure that only stars located in the foreground of the Orion Nebula were sampled, the researchers said. These methods also led the team to discover a small star cluster south of iota Ori, which has been named L1641W.

The research is detailed in the November 2012 issue of the Astronomy & Astrophysics journal.