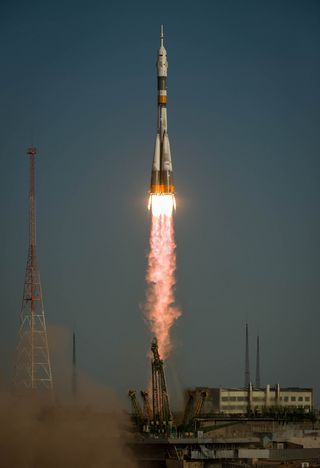 A Soyuz rocket launched an American astronaut, two Russian cosmonauts and 32 small fish into orbit Tuesday (Oct. 23), kicking off a five-month mission to the International Space Station for the human and aquatic explorers.

The Soyuz rocket roared into a clear blue sky from the Central Asian spaceport of Baikonur Cosmodrome in Kazakhstan to begin a two-day flight to the space station. Liftoff occurred at 6:51 a.m. EDT (1051 GMT).

Riding aboard the rocket's Soyuz TMA-06M space capsule are NASA astronaut Kevin Ford and Russian cosmonaut s Oleg Novitskiy and Evgeny Tarelkin. The three men are due to dock at the station on Thursday (Oct. 25) at 8:35 a.m. EDT (1235 GMT), and join three other crewmates already aboard the orbiting lab. Novitskiy is commanding the Soyuz flight.

"I think it's going to be something special, and I will get unforgettable memories," Novitskiy said in a NASA briefing before the mission. Novitskiy picked a small toy hippo, a gift from his teenage daughter Yana, to use an indicator of when the Soyuz reached the weightless environment of space. [Launch Photos: Soyuz Rocket Blasts Off With Station Crew]

"I've got training on these fish…they're a bit larger than guppies," Ford said before flight.  "It's 32 fish, plus the three of us."

While most crewed Soyuz launches have lifted off from the historic launch pad used by Yuri Gagarin, who made the first manned spaceflight in 1961. But that pad is being renovated, so Tuesday's launch blasted off from a different pad called Site 31 in the first manned launch from the site in 28 years, NASA officials said.

The new U.S.-Russian crew will join NASA astronaut Sunita Williams, Japanese astronaut Akihiko Hoshide, and Russian cosmonaut Yuri Malenchenko, who have been living on the station since July. Williams is commanding the station's Expedition 33 crew.

Tuesday's Soyuz launch comes at a busy time for the space station crew.

On Sunday (Oct. 28), a robotic Dragon space capsule built by the private spaceflight company SpaceX will depart the space station to wrap up the debut cargo delivery flight for NASA under a $1.6 billion commercial resupply contract. Days later, on Wednesday (Oct. 31), an unmanned Russian Progress spacecraft will launch and dock at the space station within six hours to deliver tons of more cargo.

Then on Thursday (Nov. 1), Williams and Hoshide will venture outside the space station in a spacewalk to fix an ammonia leak in the orbiting laboratory's cooling system.

Williams, Hoshide and Malenchenko are due to return to Earth on Nov. 19. Ford will then take command of the space station's Expedition 34 mission at that time.

On Thursday, you can watch the Soyuz docking live on SPACE.com via a NASA TV feed. The NASA broadcast will begin at 8 a.m. EDT (1200 GMT).