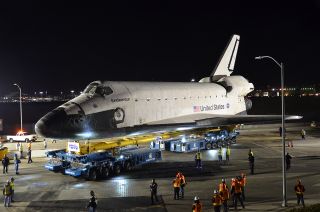 The black and white winged orbiter, which is the youngest in NASA's now-retired fleet, left Los Angeles International Airport (LAX) atop a self-propelled, overland transporter in the early morning hours on Friday (Oct. 12). The motion signaled the start of a two-day road trip to deliver Endeavour to its new exhibit at the California Science Center (CSC).

Endeavour emerged at 11:25 p.m. PDT (2:25 a.m. EDT; 0625 GMT) Thursday (Oct. 11) from a United Airlines hangar, which served as the space shuttle's temporary shelter since arriving at the airport on a NASA jumbo jet last month.

The shuttle then exited LAX through an access road at 2 a.m. PDT (5 a.m. EDT; 0900 GMT), crossed Lincoln Boulevard and turned onto Westchester Parkway, rumbling towards its first "rest stop" along the 12-mile (19 kilometers) route to the science center.

At its full speed of 2 mph (3.2 kph), the joystick-controlled, blue and yellow transporter slowly but steadily carried the 155,000-pound (70,300 kilograms) Endeavour forward. The shuttle's 78-foot (24 meters) wingspan and 58-foot-tall (18 m) tail required a route that was closed to traffic and cleared of obstacles, including light signals and trees. [Photos: Shuttle Endeavour's California Sightseeing Tour]

Endeavour will spend much of the day Friday waiting for crews to raise power lines that are blocking its way.

To Infinity (or rather Bed, Bath) and Beyond

Rolling west from the airport on Westchester, Endeavour's route takes it along La Tijera Boulevard to the parking lot of a shopping center on the corner of Sepulveda Parkway, where it will stop for about nine hours.

Although not a publicized viewing area for the public, local police departments advised thousands may turn up to see Endeavour waiting for its next move.

That won't come until the afternoon, when transformer lines are de-energized and raised. Once ready, Endeavour will travel down Manchester Boulevard, cross into Inglewood and then stop again for six hours as the next set of utility work gets underway.

The power line work will result in rolling blackouts following the shuttle's path.

Friday's start and stop moves lead up to the space shuttle Endeavour crossing over the 405 freeway.

To meet the weight distribution requirements for traveling the Manchester Boulevard Bridge, Endeavour will trade its computer-controlled transporter for a tow by a 2012 Toyota Tundra pickup truck.

The truck, which Toyota says was not modified from what is found on the sales lot, will be driven by Matt McBride, a professional stuntman and precision driver whose credits include numerous car commercials and feature films, such as last year's "Transformers: Dark of the Moon" and "G.I. Joe: Retaliation" coming out in 2013.

Astronaut Garrett Reisman, who launched on Endeavour in 2008, will ride in the Tundra with McBride.

Toyota's involvement continues a partnership between the car company's USA division and the California Science Center to provide support and awareness of the space program and education of the public through exhibits and programs. The pickup that will be used to tow Endeavour will also go on display at the CSC as part of an interactive exhibit on the physics of leverage.

Once over the freeway, Endeavour will be moved back onto its transporter and then will wait on Manchester, out of sight of the public, until daylight Saturday to continue to its first of two celebration events.

Endeavour's final journey, which the CSC dubbed "Mission 26: The Big Endeavour," will formally get underway with a 30 minute program at The Forum, the former indoor arena of the LA Lakers, on Saturday at 9 a.m. PDT (noon EDT; 1600 GMT). The event, which is expected to draw a crowd as large as 14,000 people, will feature Inglewood's mayor James T. Butts, Congresswoman Maxine Waters (D-CA) and Apollo 7 astronaut Walt Cunningham.

The celebration is one of three designated public viewing opportunities for Endeavour's move. Saturday afternoon at 2 p.m. PDT (5 p.m. EDT; 2100 GMT), the space shuttle will pause again at the corner of Crenshaw Boulevard and Martin Luther King, Jr. Boulevard for an aerial and dance tribute choreographed by "Fame" actress Debbie Allen.

The third and final public opportunity to witness Endeavour on the move will be at Exposition Park in Los Angeles, as the shuttle pulls up to the California Science Center.

The CSC plans to debut the shuttle on exhibit inside the Samuel Oschin Space Shuttle Endeavour Display Pavilion with its public opening on Oct. 30.