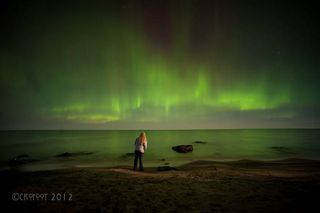 Astrophotographer Laurie Crofoot sent in a photo of herself with an aurora seen in Ontonagon County, Michigan, along the southern coast of Lake Superior. The photo was taken the night of September 30th.
(Image: © Laurie Crofoot )

A huge explosion on the sun has flung a wave of solar particles toward Earth, an eruption that may amp up northern lights displays on our planet Monday night (Oct. 8).

The solar eruption occurred late Thursday (Oct. 4) when the sun unleashed what scientists call a coronal mass ejection, or CME, NASA officials explained in a statement.

"Not to be confused with a solar flare, which is a burst of light and radiation, CMEs are a phenomenon that can send solar particles into space and can reach Earth one to three days later," NASA officials wrote. "Experimental NASA research models show the CME to be traveling at about 400 miles per second."

For comparison, at 400 miles per second, the coronal mass ejection is traveling about 1.4 million miles per hour (2.3 million kilometers per hour).

The website Spaceweather.com, which chronicles solar weather and other celestial events, reported today that the CME should reach Earth Monday and deliver a "glancing blow" to our planet's magnetic field.

The interaction of the charged particles and Earth's upper atmosphere could create dazzling northern lights displays overnight on Monday and Tuesday (Oct. 8 and 9) over the planet's polar regions.

"High-latitude sky watchers should be alert for auroras, especially during the hours around local midnight," Spaceweather.com officials wrote.

Coronal mass ejections are the most powerful explosions on the sun. When aimed directly at Earth, strong CME events "can affect electronic systems in satellites and on Earth," NASA officials said.

But CME events traveling at similar speeds to the one observed Thursday have not typically triggered major problems on Earth, or in satellites orbiting the planet, in the past, they added.

The sun is currently in the middle of an active phase of its 11-year solar weather cycle. The current cycle, called Solar Cycle 24, is expected to peak in 2013.

Editor's note: If you snap amazing photos of the northern lights displays from the solar eruption and want to share them with SPACE.com for a story or image gallery, send images, comments and location information to managing editor Tariq Malik at tmalik@space.com.