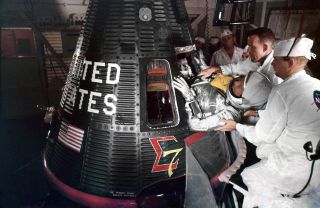 50 years ago, Wally Schirra became the fifth American in space, making the third orbital flight of the Mercury program. Schirra piloted his Sigma 7 capsule on a six-orbit mission that lasted more than nine hours on Oct. 3, 1962.
(Image: © NASA/RetroSpaceImages.com via collectSPACE.com)

Fifty years ago today, the United States launched its fifth astronaut into space.

Walter M. "Wally" Schirra, Jr. rode his one-man Mercury spacecraft atop an Atlas rocket to orbit on Oct. 3, 1962. The nine-hour mission on the "Sigma 7" capsule was the longest to date for a U.S. flight and set the stage for the day-long final mission of the Mercury Program that followed.

Schirra, whose choice of the Greek letter "Sigma" for his spacecraft's name was meant to reflect his flight's focus on technical evaluation, wrote in his biography that he strove for "engineering excellence." To that end, the almost flawless flight of Sigma 7 ended with a nearly-perfect splashdown, landing just half a mile (0.8 kilometers) from the Navy's recovery ship.

"I think they're gonna put me on the number 3 elevator" of the aircraft carrier the USS Kearsarge, Schirra joked of his parachute-assisted descent. It could have been the ultimate of Schirra's "gotchas" — jokes that he infamously pulled on his friends, colleagues and later crewmates.

He could fall victim to them, too. Just three minutes into the Mercury-Atlas 8 mission, capsule communicator, or capcom, Deke Slayton radioed Schirra with a simple-to-ask but complicated-to-answer question, "Hey, Wally, are you a turtle?" A tradition carried over from World War II pilots, the correct reply, "You bet your sweet ass I am!" was not something Schirra could broadcast to the world below. The penalty for not responding, however, was having to buy all those listening a drink of their choice.

Not missing a beat, Schirra switched from live radio to his onboard recorder and spoke the "correct answer," as NASA's official transcript would later note. [Gallery: Schirra’s Sigma 7 at 50]

Beyond the jokes, Schirra conducted observations of the planet Mercury, tracking its passage as seen through the upper layers of Earth's atmosphere, and flew the first Hasselblad camera in space, a model he himself chose and purchased at a local Houston photo shop.

Schirra also bought and wore on Sigma 7 the first Omega Speedmaster watch to fly in space, initiating the chronograph's long legacy as the timepiece of choice for both astronauts and cosmonauts to this day.

Schirra, who went on to fly Gemini and Apollo missions — the only astronaut to fly all three of NASA's early piloted spacecraft — died in May 2007 at age 84. His Mercury capsule, Sigma 7, is today on display at the U.S. Astronaut Hall of Fame in Titusville, Fla., where Schirra is honored as one of the Hall's original inductees.

Click through to collectSPACE.com for a photo gallery from Retro Space Images, which recently released for sale an archive of almost 500 images from the Mercury-Atlas 8 mission.