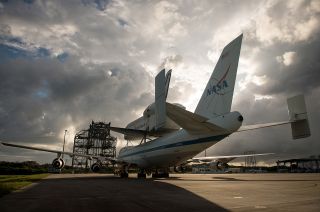 The retired spacecraft, which will be ferried on top of NASA's Shuttle Carrier Aircraft (SCA), a modified Boeing 747 jet, was originally targeted to land at Los Angeles International Airport (LAX) on Thursday (Sept. 20). Destined for display at the California Science Center (CSC), Endeavour, riding piggyback atop the SCA, is now scheduled to touch down on Friday at about 11 a.m. PDT (2 p.m. EDT; 1800 GMT).

"The decision to reschedule the flight was made Monday in coordination with the science center to ensure a safe flight for Endeavour and the SCA," NASA announced in a statement.

The one-day delay stems from NASA having to postpone Endeavour's departure from the Kennedy Space Center in Florida as a result of a low pressure weather front and its associated thunderstorms posing a threat to the ferry flight during its first leg to Houston. The carrier aircraft had been set to takeoff from Kennedy's Shuttle Landing Facility on Monday morning, but was delayed twice, first to Tuesday and then Wednesday.

"Weather predictions are favorable on Wednesday for the flight path between Houston and NASA's Kennedy Space Center," the space agency said.

Endeavour's last liftoff from Florida and the final ferry flight of the shuttle era is now targeted to begin on Wednesday (Sept. 19) at sunrise, at about 7:15 a.m. EDT (1115 GMT). [Gallery: Shuttle Endeavour Rolled Out Atop Aircraft]

Delaying the shuttle's Los Angeles arrival to Friday offered NASA the leeway to resume its plans to conduct several low flyovers and stopovers at many of its facilities spread across the southern and western regions of the country.

After taking off from Kennedy on the same runway where Endeavour made its 25th and final return from space in June 2011, the shuttle and SCA duo will perform a flyover of Florida's Space Coast, including Kennedy, the Kennedy Space Center Visitor Complex, Cape Canaveral Air Force Station and Patrick Air Force Base.

The aircraft and spacecraft will then fly west and conduct low level passes of the Stennis Space Center in Mississippi and the Michoud Assembly Facility in New Orleans, where NASA tested the orbiters' engines and built space shuttle external tanks, respectively. As the ferry flight arrives over the Gulf Coast area, the SCA will fly low passes over the Houston area before touching down at Ellington Field near NASA's Johnson Space Center.

At sunrise on Thursday (Sept. 20), the aircraft and shuttle will depart Ellington, make a refueling stop at Biggs Army Airfield in El Paso, Texas, and conduct low-level flyovers of White Sands Test Facility near Las Cruces, N.M., and the Dryden Flight Research Center at Edwards Air Force Base, Calif., before landing around mid-day at Dryden.

On the morning of Sept. 21, the SCA and Endeavour will take off one last time from Dryden and perform a low-level flyover of Northern California, passing near NASA's Ames Research Center at Moffett Field and various landmarks in multiple cities, including Sacramento and San Francisco. The aircraft will also fly over many Los Angeles landmarks before arriving at LAX.

Once on the ground and following a ceremony welcoming Endeavour to Los Angeles, the shuttle will be removed from the SCA and spend a few weeks at a United Airlines hangar undergoing preparations for transport and display. Endeavour will then travel through the streets of Inglewood and Los Angeles on a two-day, 12-mile (19-kilometer) road trip from the airport to the science center, arriving on the evening of Oct. 13.

Beginning Oct. 30, the shuttle will debut on display in the science center's Samuel Oschin Space Shuttle Endeavour Display Pavilion, beginning its new educational mission to commemorate past achievements in space and inspire the next generations of explorers.