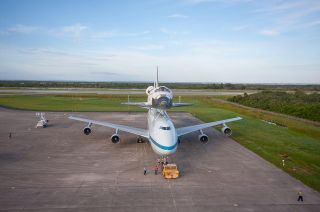 NASA's Shuttle Carrier Aircraft (SCA) is parked on the apron of the Shuttle Landing Facility at the Kennedy Space Center in Florida with space shuttle Endeavour secured on its back on Sept. 16, 2012. The SCA, a modified 747 jetliner, will fly Endeavour to Los Angeles where it will be placed on public display at the California Science Center. This is the final ferry flight scheduled in the space shuttle program era.
(Image: © Ben Cooper/LaunchPhotography.com via collectSPACE.com)

CAPE CANAVERAL, Fla. — Space shuttle Endeavour is riding high and ready to go, if only the weather would cooperate.

On Sunday (Sept. 16), NASA rolled out the retired orbiter, secured atop the space agency's modified Boeing 747 Shuttle Carrier Aircraft (SCA), from the gantry-like Mate-Demate Device that two days before had paired the spacecraft with the jumbo jet.

Now parked on the tarmac at Kennedy Space Center's Shuttle Landing Facility in Florida, the SCA is targeted to take off with Endeavour on Wednesday (Sept. 19) at about 7:15 a.m. EDT (1115 GMT), two days later than NASA originally planned. The duo will fly west on a three-day ferry flight to Los Angeles, where the shuttle is destined for permanent display at the California Science Center (CSC).

On Sunday, NASA managers first postponed the planned Monday departure due to a forecast of inclement weather during the first leg of the flight between Florida and Texas. A low pressure front and its associated thunderstorms has made it difficult for NASA to decide when it will be safe to fly.

As a result, the decision was made Monday to continue watching the weather and delay departure to no earlier than Wednesday morning. Meanwhile, the SCA with Endeavour will be rolled back into the Mate-Demate Device to protect it against any local weather.

Endeavour is the last of NASA's orbiters to fly piggyback on the Shuttle Carrier Aircraft, which will be retired after delivering the shuttle to California.  [Gallery: Shuttle Endeavour Rolled Out Atop Aircraft]

If the weather conditions improve and Endeavour leaves Wednesday, it is not yet clear what route will take it to California. Flight planners are currently working to revise the flyover and stopover schedule.

As it was originally planned, after departing Kennedy and circling Florida's Space Coast, the SCA would conduct low flyovers of the NASA centers in Mississippi and Louisiana before landing at Ellington Field near the Johnson Space Center in Houston on the first of the four legs of its trip. The SCA was originally scheduled to remain at Ellington for two nights, but when the weather first forced a one-day delay, to keep the flight on schedule, the stay was shortened to just an overnight visit.

After leaving Ellington and making a short stopover at Biggs Air Force Base in El Paso, Texas, to refuel, the SCA and Endeavour was to fly to the Dryden Flight Research Center at Edwards Air Force Base, Calif., to spend the night. On the way to Dryden, the SCA would fly Endeavour over the White Sands Test Facility in New Mexico, where the shuttle orbiters' thrusters were serviced between space missions and which served as the landing site for one early shuttle flight.

Dryden, which was the fleet's primary West Coast landing site during the shuttle program's 30-year history, was then to be the point of departure for Endeavour's final flight when the SCA took to the air one last time to finish its cross-country journey.

First heading north for scenic flyovers of Sacramento and San Francisco, the 747 jumbo jet was scheduled to — and may still — land at Los Angeles International Airport (LAX) between 11:30 a.m. and noon PDT (2:30-3 p.m. EDT, or 1830-1900 GMT) Thursday (Sept. 20). Whenever it finally arrives, a ceremony at the airport will welcome the shuttle to L.A. before work gets underway to remove Endeavour from the SCA using large cranes.

A few weeks later on Oct.12, Endeavour will leave LAX mounted to a wheeled transporter on a two-day, 12-mile (19-kilometer) road trip to the CSC. On Oct. 30, the science center will open its Samuel Oschin Space Shuttle Endeavour Display Pavilion to the public.

Three days later back in Florida, NASA's space shuttle Atlantis will embark on its own road trip, moving to the Kennedy Space Center Visitor Complex for its exhibit opening in July 2013. Atlantis' arrival will mark the final shuttle delivery, following the ferry flights of Discovery and Enterprise in April and Endeavour this week.