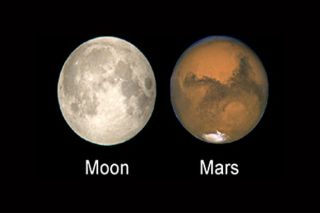 Every August, an email makes the rounds claiming that Mars will loom just as large in the night sky on Aug. 27 as the full moon. If you hoped to spot a big red orb in the heavens tonight, you'll be disappointed: The email is a hoax.

The yearly re-circulation of the phony information has earned Aug. 27 the nickname "Mars Hoax Day." The hoax, which has fooled countless people since it first originated in 2003, may have begun in innocence.

That year, the email message (of unknown origin) correctly stated that Mars and Earth would converge for their closest encounter in around 60,000 years on Aug. 27. The distance between the planets contracted to 34.6 million miles (55.7 million kilometers) on that date, a mere fraction of their average separation of 140 million miles (225 million km) and, indeed, the closest to here Mars has come since 57,617 B.C.

The email then claimed that the Red Planet would look supersized. "It will attain a magnitude of -2.9 and will appear 25.11 arc seconds wide," the email correctly stated. (Magnitude refers to apparent magnitude, a measure of the brightness of a celestial object that decreases with increasing brightness; the sun has an apparent magnitude of -26.74, and the brightest star, Sirius, -1.4. Arcseconds are a measure of the width of a celestial object.)

But then, the email offered up this ambiguous sentence: "At a modest 75-power magnification Mars will look as large as the full moon to the naked eye." Close-up pictures of Mars and the full moon side-by-side accompanied the text.

The careful reader will notice that the email confusingly claimed Mars would resemble the full moon "to the naked eye" only when greatly magnified.

But even if the original email misled readers without being an outright hoax, it developed into a hoax in later years. The chain message resurfaced in 2005, possibly because Mars and Earth were set to make another close approach that fall (but not as close as the one in 2003). Again, it claimed Mars would rival the moon on the night of Aug. 27. Now an institution, the email makes the rounds almost every year, no matter Mars' location. [The Greatest Mysteries of the Planets]

That will never happen, and it's a good thing, too. According to NASA in a statement addressing the hoax in 2005, "If Mars did come close enough to rival the Moon, its gravity would alter Earth's orbit and raise terrible tides."