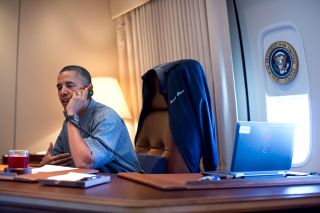 President Barack Obama today (Aug. 13) made a congratulatory phone call to the NASA team behind the last week's flawless landing of the Curiosity rover on Mars, calling the Red Planet touchdown "mind-boggling" to the delight of the rover's flight controllers.

President Obama said he "could not be more excited" about the car-size rover's mission to explore Mars' Gale Crater over the next two years. The rover touched down on the Red Planet Aug. 5 PDT to search for signs that Mars might have once had water and the other conditions thought necessary for life. NASA broadcast the presidential call live on NASA TV.

"If in fact you do make contact with Martians, please let me know right away," President Obama said, "because I've got a lot of other things on my plate, but I suspect that will go to the top of the list, even if they're just microbes."

The roomful of rover scientists responded with laughter from NASA's Jet Propulsion Laboratory in Pasadena, Calif., where the $2.5 billion rover was designed and built, and where its mission operations center is based. [Mars Rover Curiosity's Landing Day at JPL (Photos)]

Curiosity landed in dramatic fashion, being lowered to the ground on cables by a hovering "Sky Crane" in a maneuver that NASA described ahead of time as "seven minutes of terror."

"Through your dedicated efforts, Curiosity stuck the landing and captured the imagination and attention of millions of people, not just around the country but people all around the world," President Obama said. "It's really mind-boggling what you've been able to accomplish."

The President thanked the whole science team, specifically naming Charles Elachi, the director of JPL, Adam Steltzner, lead on Curiosity's entry, descent and landing phase, and other leaders on the project. He also called out another NASA figure who has emerged from the landing as a minor celebrity.

"I understand there's a special Mohawk guy that's working on the mission," President Obama said, referring to Bobak Ferdowsi, a Curiosity systems engineer who gained fame for the American flag-themed stars and stripes Mohawk hairdo he sported during the landing. "He's been one of the many stars of the show last Sunday night. I in the past thought about getting a Mohawk myself."

"That's going to be the new fashion at JPL," Elachi responded.

"It does sound like NASA has come a long way from the white shirts and the pocket protectors," the President joked. "You guys are a little cooler than you used to be."

Ultimately, President Obama said he was inspired by everything the team has accomplished so far, and looks forward to the insights Curiosity will provide.

"You guys should be remarkably proud," he said. "It's really what makes us best as a species, is just this curiosity we have and this yearning to discover and know more and push the boundaries of knowledge. You are perfect examples of that and we couldn't be more grateful to you."