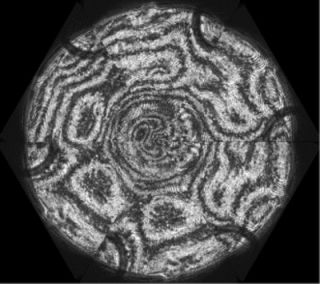 Liquid between two revolving spheres on the ISS moves much the same way Earth's magma does, influenced by temperature and pressure changes.
(Image: © ESA)

Outer space seems an unlikely place to study movement beneath the Earth's surface, but an experiment that was performed on the International Space Station is helping scientists do just that.

Geoflow II, a simulation of magma movement in Earth's mantle, is helping scientists study how heat and pressure influence the behavior of molten rock, in an experiment that couldn't have been duplicated on Earth.

"The biggest problem on Earth is the gravitational acceleration. On the ISS, we have micro-gravity conditions," Florian Zaussinger, of Brandenburg University of Technology at Cottbus in Germany, explained.

The readings produced by a series of simulations in the Fluid Science Laboratory aboard the ISS are being studied by scientists on Earth.  [Graphic: The International Space Station Inside and Out]

"The Earth's mantle is a very complex fluid," Zaussinger told SPACE.com by email. "We know more about the sun's interior than about our own mantle."

A tiny planet in space

The Geoflow II payload included two concentric spheres that rotated, one inside the other, with silicone oil between them to simulate the mantle. The inner sphere, which represented the Earth's core, was warmer than the "crust" sphere. As the two rotated, scientists on Earth monitored the motion of the oil caused by variations in temperature and pressure.

At the same time, a high-voltage electric field created a controlled artificial gravity for the spheres, directing it toward the common center of the spheres, as gravity on a planet would function.

The space station doesn't mimic the zero-gravity conditions of space, but it comes close. Zaussinger described the conditions as "unique and not possible in this way on Earth."

The mantle starts at 22 miles (35 kilometers) beneath the surface and can descend as deep as 1,800 miles (3,000 km). Drills have descended barely 8 miles (12 km), so scientists rely on models and calculations to understand how the mantle behaves.

Creating an analog of the layers of the Earth gives them something for comparing simulations.

GeoFlow II — the sequel to a study of convection within the Earth's core — simulated the molten rock beneath the crust, allowing European Space Agency astronaut André Kuipers to observe plumes of hot liquid rising toward the outer shell. Simulations predicted similar upwellings when extreme forces press on the mantle, and could explain the line of volcanoes that created the Hawaiian island chain. Movement of Earth's middle layer also could contribute to earthquakes.

Scientists from six universities in France, Germany, and the United Kingdom are analyzing the results. Understanding how the hot rocky mantle oozes could improve the overall understanding of fluid flows for industrial applications such as spherical gyroscopes, bearings, and centrifugal pumps.

Although the data is fresh, it is already providing some insights. "We found significant differences to existing models," Zaussinger said.

In 2008, the original GeoFlow studied flows in the Earth's core and composition. After returning to Earth, it was modified to study the patterns in the mantle, then launched in February of 2011.

A third mission is slated to run this fall.