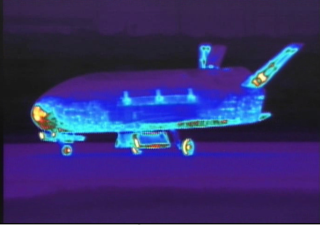 This infrared view of the U.S.'s Air Force secret X-37B space plane was taken shortly after it landed at Vandenberg Air Force base on June 16, 2012.
(Image: © 30 Space Wing USAF)

The U.S. Air Force's robotic X-37B space plane came back to Earth today (June 16) after 15 months in orbit on a mystery mission, and its much-anticipated landing was caught on video.

The first part of the 80-second video was apparently shot in infrared light. It shows the X-37B space plane cruising in for an automated landing, its belly and nose glowing a bright orange-yellow, presumably from the heat generated during re-entry to Earth's atmosphere.

The video switches over to visible wavelengths about 35 seconds in, after the space plane has touched down, and shuts off shortly after the X-37B rolls to a stop on the runway. [Photos: Air Force's 2nd Secret X-37B Mission]

The X-37B, also known as Orbital Test Vehicle-2 (OTV-2), launched on March 5, 2011, from Florida's Cape Canaveral Air Force Station. Its flight was the second-ever mission for the X-37B program; the first was flown by OTV-2's sister ship, OTV-1.

OTV-1 blasted off in April 2010 and stayed aloft for 225 days, well below the supposed 270-day orbital limit for the space plane. But OTV-2 smashed that limit, zipping around our planet for 469 days before finally coming down today.

Just what OTV-2 was doing up there for so long remains a mystery. Details of the vehicle's mission are classified, as are its payloads. The secrecy has spurred speculation — notably from China — that the X-37B may be a space weapon of some sort, but Air Force officials have long insisted that the spacecraft is simply testing out technologies for future satellites.

The X-37B looks like NASA's recently retired space shuttle, but it's far smaller. The X-37B is 29 feet (8.8 meters) long and 15 feet (4.5 m) wide, with a payload bay about the size of a pickup truck bed. For comparison, two X-37B vehicles could fit inside the payload bay of a space shuttle.

The 11,000-pound (5,000-kilogram) space plane's orbital longevity is enabled by its solar array, which generates power after deploying from the payload bay.

The X-37B is built by Boeing, though NASA originally used the vehicle as an experimental test bed until funding for the project ran out in 2004. The space plane then passed to the Defense Advanced Research Projects Agency, and it was ultimately turned over to the Air Force in 2006.