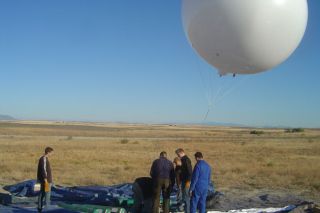 Aprivate group has taken one small step toward the prospect of building afuturistic space elevator.

LiftPort Group Inc., of Bremerton, Washington, hassuccessfully tested a robot climber - a novel piece of hardware that reeleditself up and down a lengthy ribbon dangling from a high-altitude balloon.

Thetest run, conducted earlier this week, is seen as a precursor experimentintended to flight validate equipment and methods to construct a spaceelevator. This visionary concept would make use of an ultra-strong carbonnanotube composite ribbon stretching some 62,000miles (100,000 kilometers) from Earth into space.

Thespace elevator would be anchored to an offshore sea platform near the equatorin the Pacific Ocean. At the other end in space, the ribbon would be attachedto a small counterweight. Mechanical "lifters" -- robotic elevator cars --would move up and down the ribbon, carrying such items as satellites, solarpower systems, and eventually people into space.

LiftPort's plan is to take the concept from theresearch laboratory to commercial development.

"Wewere very pleased with the test," said Michael Laine,President of the LiftPort Group. "It worked reallywell," he told SPACE.com.

Theassessment of flight hardware took place September 20 at an undisclosedlocation in eastern Washington. Due to the experimental nature of theequipment, actual whereabouts of the test site can't be revealed, primarily dueto safety reasons, Laine said.

"Ifour 23-pound (10.5-kilogram) robot falls from the ribbon...we don't wantspectators to be in the way as it makes a couple thousand dollar crater," Laine explained.

Thisweek's testing involved a 12-foot (4-meter) diameter balloon. Safety lines heldby team members kept the balloon from floating away. The ribbon dangling fromthe balloon was made of composite fiberglass, with the robot lifter running upand down the tether.

"Thislifter is much smarter than our previous versions. It's our 18th version," hesaid, with the Mark VII robot named 'Sword over Damocles' or 'sword' for short.The "belt driven" robot is battery-powered, featuring two motors and anexpanded cargo area due to increased intelligence built into the device, hesaid.

Duringthe day, the highest altitude reached by the balloon/ribbon/robot combinationwas 1,000 feet (305 meters). "It gives us complete confidence that the milegoal is well within reach," Laine said.

Laine said that the Federal AviationAdministration (FAA) has been very supportive and helpful in orchestratingtheir test flights.

"Weare cleared up to one mile high, off of a tethered helium balloon," Laine said. "Our series of tests are designed to gain inaltitude as we go, as we test our communications, range sensors, globalpositioning system satellite gear, along with temperature and camerasystems."

Furtherexperiment dates have not been pinpointed as yet, although the weather in thearea will play a key factor.

"Wehave a fairly open window to do more tests," Lainesaid. "We've probably got another month or so if we're going to do it here inWashington State."

Otheroptions are being looked at, such as staging LiftPorthardware tests from Denver, Colorado, as well as Northern California, he added.

"Butthe test was a step in the right direction," Lainesaid. "It shows that our hardware design is valid."

LiftPort has been busy at work on the spaceelevator idea for over two years.

Twocompetitions are being held: The "Tether Challenge" and "Beam Power Challenge".These are two of the key technologies required to build a space elevator.

Prizemoney is furnished by the NASA Centennial Challengesprogram. Teams from universities and industry around the country have enteredinto the competitions.