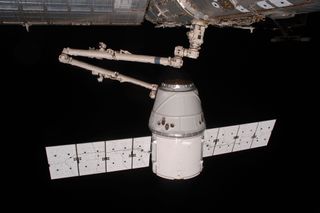 The SpaceX Dragon commercial cargo craft is grappled by the Canadarm2 robotic arm at the International Space Station. This image was taken May 25, 2012.
(Image: © NASA)

SpaceX's historic demonstration mission to the International Space Station is grabbing most of the headlines these days, but other private spaceflight companies are hatching big plans, too.

SpaceX's unmanned Dragon capsule docked with the huge orbiting lab Friday (May 25), becoming the first commercial vehicle ever to do so. Astronauts are currently unpacking Dragon's 1,014 pounds (460 kilograms) of cargo and loading it up with used station gear before the capsule heads back down to Earth on Thursday (May 31).

SpaceX may be leading the way, but a handful of other commercial aerospace firms have their eyes on the skies, too. Here's a brief rundown of some of the most prominent private spaceflight companies and what they're shooting for, in both the orbital and suborbital realms.

The California-based SpaceX already holds a $1.6 billion NASA contract to make 12 robotic supply runs to the space station, the first of which could launch in September if everything goes well with the rest of Dragon's test flight. [SpaceX's Dragon Arrives at Space Station (Pictures)]

SpaceX is upgrading Dragon to carry crew, with some funding help from NASA's Commercial Crew Development (CCDev) program. The space agency wants at least two private American vehicles to be ready to transport astronauts to the space station by 2017, to fill the void left when the space shuttle fleet retired last year.

The final shuttle mission, Atlantis' STS-135 flight in July, delivered to the station an American flag that had flown on the maiden shuttle flight in 1981. The first private spaceship to carry astronauts to the station captures that flag, and SpaceX may get the prize; company founder and CEO Elon Musk has said a crew-carrying Dragon could be operational within the next three years or so.

But the company's dreams don't end in low-Earth orbit. Musk started the company in 2002 primarily to help make humanity a multiplanet species, so Dragon may be flying astronauts to Mars someday.

Orbital Sciences Corp., based in Dulles, Va., inked a $1.9 billion deal with NASA to make eight unmanned cargo flights to the space station using its Cygnus vehicle and Antares rocket. The company is aiming to launch a demonstration mission to the orbiting lab this November or December.

Unlike Dragon, Cygnus is a cargo-only vehicle; Orbital is not working on a crewed version.

The Colorado-based Sierra Nevada Corp. is developing a small space plane called the Dream Chaser, which is designed to carry seven astronauts to and from low-Earth orbit. The spacecraft will launch vertically atop a rocket but land on a runway like an airplane.

Sierra Nevada has scored more than $100 million in CCDev funding over the past two years, and company officials say the Dream Chaser should be ready to begin operations by 2016.

Aerospace giant Boeing is in the private spaceflight business too, developing a capsule called the CST-100 to ferry astronauts to the orbiting lab and other destinations in low-Earth orbit, including private space stations provided by Bigelow Aerospace.

NASA's CCDev program has invested roughly $120 million in the CST-100's development. The capsule, which is designed to seat up to seven passengers, could be operational by 2016, company officials say.

Blue Origin, a secretive company set up in Kent, Wash., by Amazon.com founder Jeff Bezos, is also building an orbital crew-carrying spacecraft, which it calls the Space Vehicle.

The company has received more than $25 million in CCDev funding over the last two years to help develop the biconic Space Vehicle, which is designed to carry up to seven passengers. Company officials have said the craft should be operational between 2016 and 2018.

Blue Origin is also working on a suborbital spacecraft called New Shepard, which would be launched by a reusable propulsion module.

Alliant Techsystems, better known as ATK, built the solid rocket boosters for NASA's space shuttle fleet, and now it's developing its own launch system to fly astronauts to and from low-Earth orbit.

The Virginia-based company is teaming up with Lockheed Martin and European aerospace firm Astrium on the Liberty Launch System, which would use the 300-foot-tall (91 meters) Liberty rocket to blast a seven-passenger capsule into orbit.

The first test flights of the Liberty system — whose development is proceeding without CCDev funding —  are slated for 2014, and it could be operational by 2016, officials have said.

Virgin Galactic has its eyes on suborbital space. The company, headquartered in New Mexico, is developing a six-passenger vehicle called SpaceShipTwo that would carry tourists, scientists and their experiments on brief flights about 62 miles (100 kilometers) above our planet. [Photos: SpaceShipTwo's Test Flights]

Virgin Galactic has already collected deposits from more than 500 customers willing to pay $200,000 for a seat aboard SpaceShipTwo, and it has signed a deal with the nonprofit Southwest Research Institute (SwRI) for scientific flights.

Virgin officials hope to begin rocket-powered flight tests of SpaceShipTwo later this year, with commercial operations perhaps starting in 2013 or 2014.

XCOR, based in Mojave, Calif., is also developing a suborbital vehicle — a two-person space plane called Lynx, which is designed to take off and land on a conventional airport runway.

Like SpaceShipTwo, Lynx will carry both tourists and researchers to suborbital space. And like Virgin, XCOR has a contract with SwRI to fly some of its scientists and experiments.

Lynx could be in flight-test operations by the end of 2012, accoring to XCOR officials. The company plans to charge $95,000 per seat when the space plane is up and running.