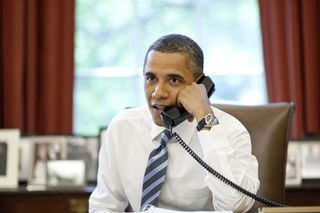 During a call to the International Space Station Friday, President Barack Obama revealed that a special American flag was flying on board the final space shuttle mission currently docked to the orbiting complex. But the presence of the flag, which also flew on the first shuttle mission in 1981, was being held as a secret by the astronauts, who planned to debut it later in the flight.

"I also understand that Atlantis brought a unique American flag up to the station," said Obama, addressing the four astronauts flying on the space shuttle's last flight and the International Space Station's (ISS) six-person crew. "One that was flown on the very first shuttle mission and one that will reside on the ISS until an American commercial space company launches astronauts to the station."

NASA currently plans to rely on the services offered by commercial companies to take its astronauts to and from the space station. Four companies have received federal funding to help develop crewed vehicles, including Space Exploration Technologies (SpaceX), the Boeing Company, Sierra Nevada Corp., and Blue Origin. The first launches are targeted for 2014 through 2016.

"Yes Mr. President, we brought a flag that was flown on STS-1 and as part of a special presentation — a little ceremony we're going to have before we undock from the International Space Station — we will present that to the space station crew," said Atlantis' STS-135 commander Chris Ferguson. "It will hopefully maintain a position of honor until the next vehicle launched from U.S. soil brings U.S. astronauts up to dock with the space station." [9 Weird Things Flown on NASA Shuttles]

After more than 30 years and 135 flights, NASA is retiring its three shuttle fleet with this mission to focus on sending astronauts beyond low Earth orbit to locations including an asteroid, the moon and ultimately Mars.

As late as two hours before the President's call, the astronauts were still set on keeping the flag a secret.

"We have a special item we're going to leave behind in what hopefully is a very thought provoking and emotional farewell ceremony that we will have as the space shuttle prepares to leave the International Space Station for the final time. I'd just ask you to perhaps hold on until that moment and you'll get a look at what we have in store," Ferguson told collectSPACE.com during a joint crew news conference held Friday morning. [Video: Obama Talks With Final Shuttle Crew]

Throughout the lead up to their July 8th launch, the crew members refused to say what memento they were flying to mark the end of the shuttle program, deferring reporters' questions to their commander — who also wasn't saying.

"Our commander wants to keep a lot of that a surprise for the day that we do those things," said pilot Doug Hurley in a pre-flight TV interview. "Obviously, there may be some mementos involved before we leave the space station for the last time but just trust us, watch the mission, and you will see some neat stuff."

Hurley told collectSPACE that it was Ferguson's idea to fly the STS-1 flag, which launched on April 12, 1981 with astronauts John Young and Bob Crippen on the maiden mission of space shuttle Columbia.

STS-1 flew 10,000 small 4- by 6-inch U.S. flags and 1,000 medium-size 8- by 12-inch flags. Columbia also had two standard, or full size flags aboard, one "to be awarded by the [NASA] Administrator to hang in Washington, D.C. at perhaps the Air and Space Museum or the Capitol" and the other "to be hung at Johnson Space Center" in Texas.

According to NASA, the flag flown on Atlantis is one of the 1,000 medium size STS-1 flags.

News of the flag's flight was included in a podcast posted by NASA to its website on launch day, but with the wave of photos, videos, and other multimedia generated by the shuttle's historic last liftoff, it received little if any media attention.

More than just a decoration for the space station's walls, the STS-1 and 135 flown flag will serve as a prize of sorts for the first company to bring astronauts to the ISS.

"I understand it'll be kind of like a capture the flag moment for commercial spaceflight," joked President Obama. "So good luck to whoever grabs that flag."

SpaceX, one of the competitors, embraced the challenge in a tweet soon after hearing the President's remarks.

Ferguson told Obama that his mention of the game raised "an excellent point."

"We sure hope to see some of our commercial partners climbing on board really soon. I know there is a lot of competition out there. A lot of people are fervently working towards this goal, to be the first one to send a commercial astronaut into orbit. We look forward to see them here soon," he said.

View the other mementos aboard Atlantis and follow the final space shuttle mission by visiting collectSPACE.com’s STS-135 Flight Day Journal.