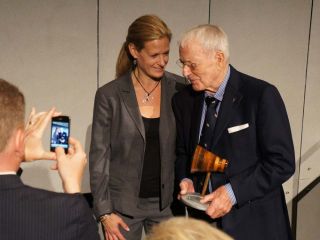 Scott Carpenter, former NASA astronaut, received a wooden replica of his Mercury spacecraft during a ceremony aboard the USS Intrepid on May 24, 2012.
(Image: © Jeremy Hsu | TechMediaNetwork)

NEW YORK — Commander Scott Carpenter first stepped foot on the USS Intrepid when the aircraft carrier's helicopters rescued him from his waterlogged space capsule 50 years ago. Today, the former NASA astronaut returned to the carrier-turned-floating-museum here for a ceremony commemorating his return to Earth during the height of the Cold War's space race.

The crowd attending the ceremony gave a standing ovation for Carpenter, who became the second American to orbit the Earth during NASA's Mercury-Atlas 7 mission that launched on May 24, 1962. He and John Glenn represent the last surviving members of the Mercury Seven — the first seven U.S. astronauts selected to fly in space.

But Carpenter deflected attention from his own exploits by talking about the bigger picture of America's past and future space endeavors.

"I was at that time — throughout those early '60s — aware of the fact that we were driven by the competition we faced in the Cold War with the Soviet Union," Carpenter said. "It was a good thing that maybe it worked on both sides of the iron curtain, because we all believed that preeminence in space was a condition of our freedom."

Space competition was not without its risks. Upon re-entry, Carpenter's Mercury spacecraft overshot its target area in the Pacific Ocean by 250 miles (400 kilometers) and ended up floating in the water at a 45-degree angle tilt. The astronaut rode it out until the Intrepid's helicopters arrived to pick him up. [Could the Navy Build a Flying Aircraft Carrier? ]

One Intrepid flight deck crew member remembered not knowing what had happened with Carpenter's off-target landing even when the helicopters took off. That Navy airman, John Olivera, was one of 11 crew members out of almost 4,000 Intrepid sailors with the same blood type as Carpenter. His orders were to stand by in case the astronaut might need a blood transfusion.

"For three days, I wasn't allowed to work or hurt myself — just rest in case they needed my blood," Olivera told InnovationNewsDaily. "As it turned out, nothing did happen. I've been standing by for 50 years in case he needed my blood."

To mark the 50th anniversary event, the Intrepid Sea, Air and Space Museum presented Carpenter with a hand-carved wooden replica of his original Mercury spacecraft, named Aurora 7, made from the original Intrepid's flight deck. In return, Carpenter praised the Intrepid by saying "she stands for all of the fine things that this nation stands for, and she is the real hero here today."

Carpenter wrapped up his short speech with reflections about NASA's accomplishments — especially the Apollo-era flights to the moon and the safe recovery of the troubled Apollo 13 mission. He also pointed to Mars as the future for U.S. human spaceflight, and preempted people who would question why such a long, difficult journey might be necessary.

"The answer is simply we will fly to Mars because it is inevitable," Carpenter said. "And I wish I were going to be around to see it, but it will happen."