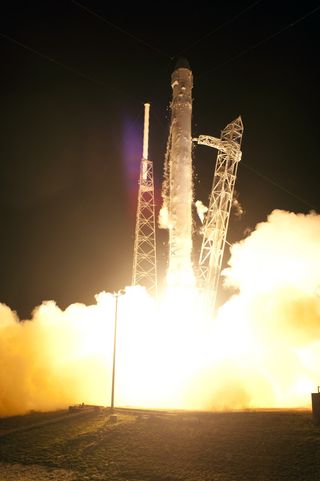 NASA and commercial spaceflight pioneers are hailing Tuesday's historic launch of a private spaceship toward the International Space Station, but the successful liftoff is just the first step in a challenging 10-day test flight.

The unmanned Dragon capsule, built by the California-based firm SpaceX, roared off the pad at Florida's Cape Canaveral Air Force Station early Tuesday (May 22) atop SpaceX's Falcon 9 rocket, becoming the first private spacecraft ever to launch toward the orbiting lab.

This in itself is a big milestone, ushering in a new era of American public-private space partnership that NASA has been encouraging for several years. But Dragon still has quite a few boxes to check off before this demonstration mission — a test to see if the capsule is ready to begin contracted cargo flights for NASA — can be declared a complete success, officials said.

"Things are moving in the right direction, but there's still lots of activities that'll occur over the next days that will really stretch the SpaceX team, and also stretch the NASA team a little bit, as we work together to get, finally, to space station and deliver some demonstration cargo to ISS," Gerstenmaier added.

Docking yet to come

For example, Dragon still has to chase down the station, which is zipping around Earth at 17,000 mph (27,360 kph). And the SpaceX team must prove the capsule can sidle up next to the huge orbiting lab without posing a danger to the $100 billion structure or the six astronauts currently living there.

This checkout of Dragon's navigational prowess and maneuverability will occur in stages. On Thursday (May 24), the spacecraft will come within 1.5 miles (2.5 kilometers) of the space station. Then, a day later, it will get much closer, approaching at the command of the crewmembers aboard the outpost.

If the Dragon capsule passes a set of "go-no go" checks performed by Mission Control in Houston, NASA will approve the vehicle to come within about 33 feet (10 meters) of the station on Friday (May 25). From inside, astronauts Don Pettit and Andre Kuipers will then use the lab's robotic arm to snag Dragon and berth it to the Harmony node.

The hatches between the two spacecraft are scheduled to open on Saturday (May 26). At that point, station crewmembers will begin offloading the 1,014 pounds (460 kilograms) of cargo that Dragon carried up. When that's done, they'll load the capsule up for its trip back to Earth.

Dragon will stay attached to the station until May 31, when it will depart for a fiery return journey through our planet's atmosphere that ends with a splashdown in the Pacific Ocean. SpaceX plans to recover the spacecraft by ship off the California coast.

Taking nothing for granted

That's a long list of complicated steps, and neither NASA nor SpaceX is taking complete success for granted.

"There are still a thousand things that have to go right, but we are certainly looking forward to the rest of this amazing mission," said Alan Lindenmoyer, manager of NASA's commercial crew and cargo program.

Still, the SpaceX team is thrilled with the mission's progress so far. Dragon has already made it to orbit and deployed its solar panels on schedule, and it now has the space station in its sights.

"I would really count today as a success, no matter what happens with the rest of the mission," SpaceX CEO and founder Elon Musk said.