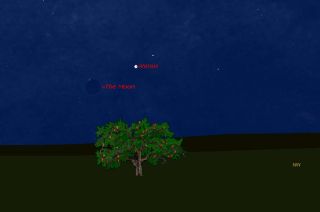 This sky map shows the location of bright Venus and the crescent moon in the northwestern sky as it will appear at 9 p.m. on May 22, 2012 in mid-northern latitudes.
(Image: © Starry Night Software)

We all know how, after a great theatrical show has concluded the actors come out for a final bow.  Well, in a way, we’re nearing the end of a great celestial show that that has been going on for many months and the two main characters — Venus and the moon — will soon be taking their final bows.

On Tuesday night (May 22), Venus and a lovely crescent moon will again adorn the west-northwest sky, marking the last gathering of these two objects visible in night sky this year. Venus will stand about 6 degrees above and to the left of the moon. These two brightest luminaries of the night will make for an eye-catching sight until the moon sets about 1 1/2 hours after sunset, followed some 20 minutes later by Venus.

Venus is swiftly approaching the sun. In fact, it is sinking so fast toward the sunset horizon that toward the end of this week it may become noticeably harder to see. By next Monday evening (May 28) it will set only an hour after the sun and will be very low above the west-northwest horizon a half hour after sundown.

See Venus during the day

Venus is so bright that you can see it even in broad daylight. But you have to search just the right spot in a deep-blue sky. [Skywatcher's pictures of Venus and the moon]

One way to tell where to hunt is to locate the famous Sickle of Leo, the Lion – that backwards question mark pattern of stars that marks the head and mane of the lion. At the top of the Sickle is a star known as Rasalas.

After it gets sufficiently dark, locate Rasalas in the sky and walk around until it is above a treetop, chimney or some other landmark. Note exactly where you're standing, and also the exact time.

Now check the dates below. If you return to same spot the following afternoon, and subtract the amount of time listed below from when you sighted Rasalas the previous night, Venus will be almost over the same landmark. Sweeping that area of the sky with binoculars will help you find it.

Example: On the evening of May 24, you have located Rasalas and at 9:30 p.m. local time have positioned it above the peak of your roof. In checking the table for the next day (May 25), you need to subtract 4 hours and 30 minutes.

So, at 5 p.m. that afternoon, stand exactly in the spot you did the previous evening and look toward the peak of your roof. Venus will be there. Again, if you can’t immediately find it with your unaided eye, use binoculars to sweep it up.

This is certainly the week to follow Venus with a telescope! Right now, Venus is swinging close to Earth, overtaking us in the planetary race around the sun.

At such times Venus is the nearest to us that any major planet can ever come. Furthermore, it shows a larger apparent disk than any other solid body in the universe except the moon. It is now a big, beautiful crescent that will grow a little bigger and thinner day after day.

On Tuesday night, Venus will be only 8 percent illuminated but by next Sunday evening (May 27) it will have slimmed down to just 3 percent.

To get an idea of how thin a crescent that is, just look at the moon when it’s hovering near Venus on Tuesday night. Your best telescope views will probably be in early twilight, or even the daytime.

Can you make out the crescent’s cusp extensions; threadlike wisps of light extending beyond the crescent’s points? Also, examine the cusps themselves. Sometimes one appears slightly brighter or sharper than the other.

And just remember that our soon to be extinguished “evening lantern” will continue its nightly plunge until it passes directlybetween the sun and Earth on June 5 – the last transit of Venus until December in the year 2117.

Editor's note: If you snap any amazing pictures of Venus and the moon that you'd like to be considered for use in a story or gallery, please send images and comments to SPACE.com managing editor Tariq Malik at tmalik@space.com.