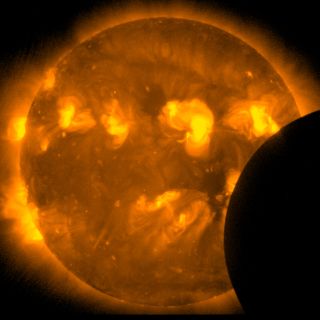 This image, taken by the sun-watching Hinode satellite, was taken two minutes after the start of the annular solar eclipse on May 20, 2012.
(Image: © JAXA/Hinode)

Spectators on Earth weren't the only ones to spot an impressive solar eclipse Sunday (May 20). Two satellites managed to snap amazing images and videos of the solar eclipse from space.

The European Space Agency's Proba-2 microsatellite and Japan's Hinode sun observatory had ring-side seats to Sunday's so-called "ring of fire" solar eclipse. In fact, both satellites were able to capture multiple views of the eclipse as they orbited Earth.

The Proba-2 space weather microsatellite recorded four views of the solar eclipse as it flew 435 miles (700 kilometers) above the surface of the Earth. The satellite first spotted the natural phenomenon at 5:09 p.m. EDT (2109 GMT) and last made contact with the eclipse at 11:04 p.m. EDT (0304 GMT May 21), according to ESA officials.

Yesterday, the moon passed between Earth and the sun in a so-called annular solar eclipse. The name comes from the Latin word "annulus," which translates to "little ring." During an annular solar eclipse, the moon does not completely block the sun's light, but leaves a "ring of fire" around its circumference.

While the full effect of the fiery ring was only visible to observers along a narrow path, skywatchers in East Asia and the western United States were treated to stunning views of a partial solar eclipse. [Photos: Annular Solar Eclipse of May 20, 2012]

The sun-watching Hinode satellite, which is jointly managed by the Japan Aerospace Exploration Agency, NASA and the Particle Physics and Astronomy Research Council in the U.K. also snapped photos of the annular solar eclipse.

Hinode's orbit allowed the spacecraft to continually observe the sun, essentially giving it the same perspective as skywatchers on Earth, NASA officials said in a statement. As Hinode flew roughly 400 miles (630 km) above Earth, the satellite passed through the shadow regions four separate times.

Proba-2's observations of the eclipse will help researchers at the Royal Observatory of Belgium monitor the status of the satellite's main instrument, called SWAP, which monitors the sun in extreme ultraviolet light.

As the moon wanders between Earth and then sun, the regions where the lunar disk masks the sun's light appear black at these wavelengths, ESA officials said in a statement. But since scattered light and noise picked up by the instrument can render a pixel less dark, the solar eclipse helps researchers assess the performance of each pixel.

Scientists are also analyzing data from Proba-2's LYRA instrument, which measures solar emissions. During the eclipse, Proba-2 saw a dip in the signal's intensity, as solar radiation was blocked by the moon.

The researchers noticed that the sun's output before, during and after the eclipse was not symmetrical, which shows that stormier active regions on the solar surface make up majority of that signal and are not evenly located across the solar disk.