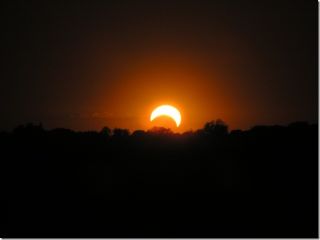 Skywatcher Sam Border snapped this photo of a partial solar eclipse as it appeared at sunset near Blue Grass, Iowa on May 20, 2012.
(Image: © Sam Border)

A spectacular solar eclipse treated skywatchers around the world to dazzling celestial views Sunday (May 20), as the moon wandered between Earth and the sun, leaving a "ring of fire" in the sky.

A so-called annular solar eclipse was seen across the globe from late afternoon to early evening, beginning in East Asia and traveling across to the western United States. In an annular solar eclipse, the moon does not completely block the sun, but leaves a fiery ring around its circumference.

Observers along a narrow path were well placed to see the full annular solar eclipse, but skywatchers elsewhere (with the exception of the U.S. East Coast) caught a stunning partial eclipse. At its peak, the moon covered roughly 94 percent of the sun's light.

The eclipse was first visible in East Asia before crossing the northern Pacific Ocean and putting on a show for skywatchers in the western and central United States. [Annular Solar Eclipse of May 20 (A Photo Guide)]

"I captured some great eclipse shots using a dual pane of glass to catch the eclipse reflection while being back lit from the sun itself," David M. told SPACE.com in an email. "I also captured some reflections and shadows showing the eclipse crescent while capturing a robin."

"Smoke from a wildfire north of Phoenix produced a haze of smoke over the northern suburbs of the city, giving the sunlight an orange tint as the eclipse unfolded," one skywatcher told SPACE.com. "The sky took on the look of sunset — whether from the smoke, or the moon blocking the sun, or both — even as the sun remained well up in the western sky."

In Boulder, Colo., astronomers at the University of Colorado hosted what they called the world's largest solar eclipse viewing party. The event attracted some 13,000 skywatchers, who spied the eclipse through the clouds.

"It was cloudy here, but the sun peeked through every few minutes," said LiveScience senior writer Stephanie Pappas, who was covering the event for SPACE.com. "So clouds were a pain, but we did catch the maximum, partly."

Casey Cass, a photographer for the University of Colorado, snapped photos of the crowd as they gazed up at the sun using special solar eclipse glasses.

Skywatcher Derek Meche saw the eclipse from Lafayette, La. Only part of the eclipse was visible, he said, but he took several photos with his Nikon D90 camera.

Meche's images show the moon taking a bite out of the orange sun against the evening sky.