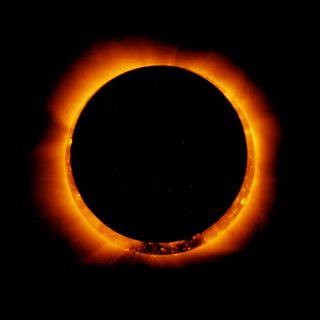 A solar eclipse will blot out part of the sun this weekend, and astronomers in Colorado are organizing what they hope will be the world's largest viewing party in one place. Their venue: an entire football stadium.

The eclipse will occur in the afternoon and early evening on Sunday (May 20), during which time the moon will pass between Earth and the sun, casting a shadow on the planet. This weekend's event is called an annular solar eclipse (from the Latin word "annulus," meaning "little ring"), because the moon will not completely cover the sun, but will leave a fiery ring around its circumference.

At its peak, the moon will block roughly 94 percent of the sun's light. This potentially spectacular solar eclipse will be visible from much of Asia, the Pacific region and North America, provided the weather cooperates.

The University of Colorado, at Boulder, will be hosting a free eclipse-watching event at the campus' Folsom Stadium, beginning at 5:30 p.m. local time (6:30 p.m. EDT; 2230 GMT). Special protective glasses will be sold at the football stadium, but organizers suggest planning ahead in case supplies run out. [Solar Eclipse of May 20 (Photo Observing Guide)]

Attendees will be treated to hot dogs, and have the opportunity to participate in trivia contests and giveaways. But the main attraction will, of course, be the show in the sky, which promises to be the best solar eclipse the U.S. has seen in more than a decade, said event organizer Doug Duncan, an astronomer at the University of Colorado, and director of the school's Fiske Planetarium.

"After leading eclipse expeditions since 1970 I got tired of people not being prepared to watch, so as leader of the country's top university planetarium I went into action," Duncan said in a statement.

The event has already received a strong response, and Duncan is expecting between 10,000 and 20,000 people to attend the viewing party (the stadium seats more than 40,000 spectators, but the eclipse will not be visible from all sections).

"As of right now, we have sold 39,000 pairs of eclipse glasses," Duncan told SPACE.com. "We’ve been selling them at the planetarium and a local hardware store, and they've sold out."

He reminds observers that it is extremely important to protect your eyes before viewing the eclipse. Skywatchers should never look directly at the sun, either with the naked eye or through telescopes or binoculars without the proper filters.

"The sun is very powerful, so you need to protect your eyes," Duncan said.

The eclipse will occur in the late afternoon or early evening of May 20 throughout North America, and May 21 for observers in Asia. This solar eclipse skywatching guide has more specific information about viewing locations and times.

To safely view the annular solar eclipse, you can purchase special solar filters or No. 14 welder's glass to wear over your eyes. Warning: Standard sunglasses will NOT provide sufficient protection. Astronomers use special filters and glasses to observe the sun safely.

Another safe and simple technique is to watch the eclipse indirectly with the solar projection method. This involves using your telescope, or one side of your binoculars, to project a magnified image of the sun’s disk onto a shaded white piece of cardboard.

Several U.S. national parks are also planning their own observing events for the solar eclipse, and NASA's Ames Research Center in Moffett Field, Calif. are sending a group of researchers to the Grand Canyon.