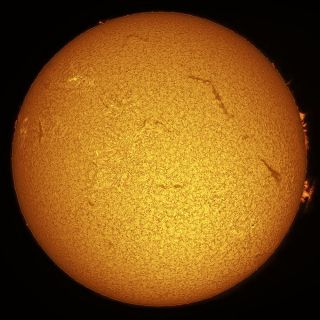 This is a typical view of the Sun as seen through an H-alpha telescope. Details in the sun’s chromosphere that are visible include fine, carpet-like spicules and long, dark filaments across the disk as well as delicate prominences along the edges of the sun. Paul Hyndman captured this view on April 16, 2004, using an Astro-Physics 105-mm refractor fitted with a Coronado Solarmax90/T-Max and 30-mm blocking filter, a Tele Vue 2X Powermate lens and an SBIG STL-11000M CCD camera.
(Image: © Paul Hyndman)

With a solar eclipse and a historic Venus transit of the sun both coming soon, hundreds of people had a chance to practice observing our star through dozens of specially filtered telescopes during a recent solar-observing bonanza in New York.

The event, dubbed the Northeast Astronomy Forum Solar Star Party, offered eager skywatchers and other curious members of the public an opportunity to safely view the sun through telescopes at various wavelengths. The result: Spectacular views of the sun ranging from plain visible light (also known as "white light") to the red light given off by hydrogen atoms and the purple glow emitted by calcium ions.

Some of the world’s finest solar astrophotographers and observers were on hand to field questions from attendees of the sun-watching session, which was held at Rockland Community College in Suffern, N.Y., on April 28 and 29. The experts explained the inner workings of the sun and the various solar features visible in the eyepiece.

They also shared tips about how to safely observe and photograph two spectacular upcoming skywatching events — the annular solar eclipse on May 20 and the transit of Venus across the sun's face on June 5 and 6, depending on location.

During the transit, Venus will appear in silhouette against the sun as a small, slow-moving black dot. Venus transits occur in pairs eight years apart, but these dual events happen less than once per century. The last such transit occurred in 2004, and the next won't come until 2117. [Venus Transit of 2004: 51 Amazing Photos]

"We have volunteers from across the United States, Canada, Mexico, England, Italy, Germany, and Norway come to the star party to share their passion for the sun and to educate the public," said Robert "Barlow Bob" Godfrey, the star party’s founder and a member of the Rockland Astronomy Club, which organizes the NEAF.

"People from all walks of life and skill levels attend our star party year after year — from rank beginners to seasoned observers," he added.

WARNING: Never look directly at the sun through a telescope, binoculars or with the unaided eye as severe eye damage can result. Amateur and professional observers use special filters.

In addition to gaining fantastic views of the sun, people were able to glimpse the bright slim crescent of Venus in broad daylight through an unfiltered telescope.

During the May 20 eclipse, the moon will cover most of the sun, leaving a ring of bright sunlight shining in the sky. A total solar eclipse — in which the moon blots out the entire sun — will happen in November

November's total solar eclipse will be visible along a narrow track that crosses northern Australia and the South Pacific. Observers in the city of Cairns in Queensland will be immersed in the moon’s shadow for 2 minutes early in the morning of Nov. 14.

As all of these solar skywatching events loom, the sun continues to get more and more active. Solar activity waxes and wanes on an 11-year cycle, and researchers think the current one — known as Solar Cycle 24 — will peak in 2013.

Aurora fanatics Imelda Joson and Edwin Aguirre are eagerly awaiting the next solar storm. Follow SPACE.com for the latest in space science and exploration news on Twitter @Spacedotcom and on Facebook.