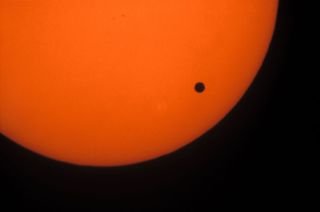 This image was captured by Marcin Filipek from Poland on June 8, 2004.
(Image: © Marcin Filipek, Polish Association of Amateur Astronomers)

A NASA sun-watching spacecraft will have an unbeatable view of June's historic Venus transit, but some of the probe's scientists are taking measures to get a great look for themselves here on Earth, too.

NASA's Solar Dynamics Observatory (SDO) satellite will watch from space as Venus crosses the sun's face on June 5 (June 6 in the Eastern Hemisphere) — the last such Venus transit until December 2117. Not content to live vicariously through their spacecraft, some SDO scientists are headed to Alaska to watch the seven-hour event in its entirety.

"For the United States, only Hawaii and Alaska will see the entire transit," said SDO project scientist Dean Pesnell, of NASA's Goddard Space Flight Center in Greenbelt, Md. "There's a solar physics meeting in Anchorage, Alaska, the week after the transit. So we said, 'Well, let's go to Alaska and see the transit.'"

Venus transits occur in pairs that are eight years apart, but these dual events take place less than once per century. The last transit happened in 2004, and the next won't come until 2117. So next month's transit is the last chance for skywatchers to see Earth's so-called sister planet trek across the solar disk. [Venus Transit of 2004: 51 Amazing Photos]

Venus transits have played a large role in astronomical history. Scientists and explorers, for example, mounted large expeditions to observe the 18th century's two transits, which occurred in 1761 and 1769.

The idea was to time the Venus transit precisely from many different spots around the globe, then use the principle of parallax to calculate the distance from Earth to the sun — a quantity that had eluded scientists for millenia. With that information in hand, the scale of the entire solar system would follow.

The 1761 and 1769 efforts both came up short, but measurements made with the help of photographs during the 19th century's Venus transits finally gave researchers the data they needed.

For its part, SDO will observe the transit to learn more about Venus' atmosphere and to help calibrate some of its instruments, Pesnell said.

Pesnell and his colleagues plan to watch the transit from Fairbanks, and they're going to use the rare event as an education and outreach opportunity.

"We're working with some amateur astronomers up there to set up a family science-oriented event in the city of Fairbanks," Pesnell told SPACE.com, adding that the team will bring 10 to 20 different displays to teach people about the sun and SDO. "It's been a fairly popular thing to take to cities."

Those of us unable to make the trek to Alaska, Hawaii or other good transit-viewing locales around the world will still be able to watch the historic event as it happens. Pesnell said that NASA plans to webcast live footage of the transit from SDO, whose images should be spectacular.

"There are no clouds in space, so we're guaranteed to have a pretty good view," Pesnell said.

The $850 million SDO spacecraft launched in February 2010. The probe's five-year mission is the cornerstone of a NASA science program called Living with a Star, which aims to help researchers better understand aspects of the sun-Earth system that affect our lives and society.