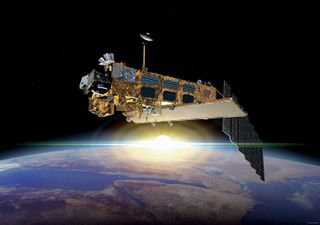 An enormous Earth-observing satellite that was officially declared dead in space Wednesday (May 9) may stay in orbit for the next 150 years, posing a threat to other spacecraft zipping around our planet.

The $2.9 billion Envisat spacecraft, which is about the size of a school bus, went mysteriously silent about a month ago after 10 successful years of studying our planet from orbit. The European Space Agency (ESA) announced Wednesday that it had given up hope of recovering the satelite, which died a year before its planned 2013 decommissioning.

The announcement instantly made Envisat one of the biggest pieces of space junk in low-Earth orbit. Its body measures about 30 feet long by 16 feet wide (9 by 5 meters), but its 46-foot-long (14-m) solar array gives the satellite an even bigger profile. The dead spacecraft weighs 17,600 pounds (8 metric tons).

At the moment, the disposal plan for Envisat is simply to let the huge spacecraft spiral slowly down to a fiery death in Earth's atmosphere. In 2010, ESA scentists estimated that this could take 150 years or so. [6 Biggest Spacecraft to Fall Uncontrolled from Space]

"Therefore, from an environmental standpoint, the recent failure of Envisat does not pose any greater risk than if the spacecraft had continued to operate until its expected decommissioning next year," said Nick Johnson, chief scientist of NASA's Orbital Debris Program Office at the Johnson Space Center in Houston.

Space debris trackers will be keeping a close eye on Envisat to help protect functioning spacecraft. The Joint Space Operations Center at Vandenberg Air Force Base in California, for example, will give satellite operators a heads-up if Envisat is projected to come within 0.6 miles (1 kilometer) of their spacecraft, Johnson said.

For now, however, there's no way to prevent Envisat from slamming into other pieces of space junk and adding yet more pieces to Earth's ever-growing cloud of orbital debris.

"In the near term, there is nothing that can be done to prevent a collision between Envisat and other cataloged orbital debris, although such a collision has a very low annual probability," Johnson told SPACE.com via email.

That's not to say, however, that Envisat will definitely stay aloft for the next century and a half, zipping around Earth as a sort of zombie space missile. More and more researchers are stressing the need to start actively removing debris from orbit, lest the planet's space-junk problem get truly out of hand.

Scientists have proposed a number of debris-removal concepts, from net-wielding spacecraft that drag junk out of orbit to giant lasers that steer defunct spacecraft down into Earth's atmosphere. None of these ideas have been put to the test — yet.

"Envisat could be a candidate for a future orbital debris removal demonstration mission," Johnson said.