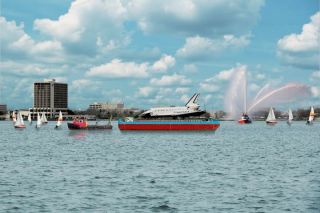 HOUSTON — A space shuttle will launch later this month from NASA's Kennedy Space Center in Florida, but instead of soaring into the sky, it will set sail on the water.

The full-scale, high-fidelity space shuttle mockup, which was formerly known as "Explorer" for the 18 years it was displayed at the Kennedy Space Center Visitor Complex, will be loaded on a barge and leave the spaceport on May 20. Ten days later, it will arrive in Clear Lake near NASA's Johnson Space Center (JSC) in Houston, starting a three day festival welcoming the winged display to Texas.

Beginning June 1, "Shuttlebration Weekend" will celebrate the past and future of NASA's crewed space exploration programs, culminating in a parade to deliver the replica to Space Center Houston, the official visitor center for JSC.

"NASA's space shuttle changed the way we all think about space, making it more accessible, understandable and useful," Richard Allen, Space Center Houston's president, said in a statement issued Tuesday (May 8) to announce the Shuttlebration. "It is our intent to continue that legacy with this exciting new attraction, which will offer a one-of-a-kind visitor experience that will engage, educate and inspire the next generation of explorers." [Photo Tribute to NASA's Shuttle Program]

Shuttlebration Weekend begins on the afternoon of Friday, June 1, when the replica will arrive at the Johnson Space Center NASA Road 1 dock on Clear Lake near the Nassau Bay Hilton hotel.

The public is invited to a free street party between the dock and the hotel to witness the replica space shuttle's arrival. The party will include NASA exhibits and static displays of vehicles and technologies being developed for the future, as well as local marching bands, food and entertainment.

The next day on Saturday (June 2), the shuttle mockup will be loaded onto a mobile transfer vehicle for its trip to Space Center Houston. The lakeside load-out will take a full day to complete.

Early on Sunday, the replica will make the three-hour trek down NASA Road 1 from the Hilton to its permanent home at Space Center Houston. Although logistics are still being worked out, it is likely that some trees and power fixtures will need to be temporary moved or hedged to allow the shuttle to pass.

Along the route, the shuttle will be escorted by prototype planetary rovers being built at JSC for future solar system exploration.

Upon the replica's arrival, Space Center Houston, along with Johnson Space Center, will host a free celebration in its parking lot from 9 a.m. to noon CDT (1400 to 1700 GMT). The family-friendly event will include more chances to see the shuttle attraction up close, and to get a look at NASA's latest developments in space exploration.

Following "Shuttlebration Weekend," the replica will remain in Space Center Houston's parking lot while its permanent display venue is being completed.

The center's long-term plan is to build an education facility around the orbiter that will provide both historical context and a hands-on educational experience.

Space Center Houston also plans to upgrade the replica itself. The mockup already allows visitors to go inside and tour the crew compartment — both its mid- and flight deck levels — as well as have a look down the length of the 60 foot payload bay.

"We're going to replace the cockpit with an all new cockpit like was flying on Atlantis on [the space shuttle program's] last flight," Allen said at a meeting held Tuesday, referring to the "glass cockpit" upgrade that Atlantis and the other orbiters received in the early 2000s.

The mockup, which was built by Florida-based aerospace replica manufacturer Guard-Lee, Inc., is considered to be the highest fidelity model of the shuttle ever created. Built using schematics, blueprints and archived documents lent by NASA and its shuttle contractors, some of the replica's core parts, including the tires used on its landing gear, are authentic to the shuttle program.

The replica was removed from the Kennedy Space Center Visitor Complex in December 2011 to make way for the Florida visitor attraction to exhibit space shuttle Atlantis. It has since been parked near Kennedy's Vehicle Assembly Building awaiting its barge to Houston.