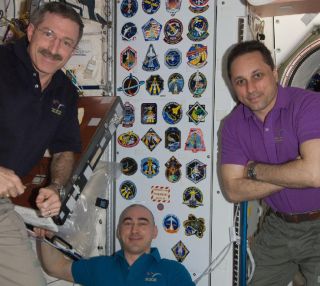 Expedition 30 commander Dan Burbank (left) and Russian cosmonauts Anton Shkaplerov (right) and Anatoly Ivanishin pose for a photo aboard the International Space Station's Unity node. Behind them is the collection of insignias representing space shuttle crews who have worked on the station.
(Image: © NASA)

Three astronauts are set to leave the International Space Station early Friday morning (April 27) to return home after living in space for nearly half a year.

NASA astronaut Dan Burbank and Russian cosmonauts Anton Shkaplerov and Anatoly Ivanishin are slated to undock from the space station at 4:18 a.m. EDT (0818 GMT) Friday. They are expected to wrap up a 5 1/2-month space mission with a ride back to Earth aboard a Russian Soyuz capsule, which is due to touch down in the steppes of Kazakhstan at 7:45 a.m. EDT (1145 GMT).

The three spaceflyers arrived at the orbiting lab on Nov. 16. Their departure will bring the station's Expedition 30 mission to a close and mark the beginning of Expedition 31. Burbank served as commander of the Expedition 30 crew. He handed the orbiting lab's keys over to cosmonaut Oleg Kononenko during a traditional change-of-command ceremony Wednesday (April 25).

"It's hard for me to believe that our nearly six-month expedition is coming to an end," Burbank said during the ceremony. "It seems like Anton, Anatoly and I just arrived in our Soyuz yesterday." [Gallery: Space Station's Expedition 30 Mission]

Kononenko will remain aboard the station until July, as will NASA astronaut Don Pettit and Dutch spaceflyer Andre Kuipers. The three will have the station to themselves until May 17, when three more Expedition 31 crewmembers — NASA astronaut Joe Acaba and cosmonauts Gennady Padalka and Sergei Revin — will arrive.

But there should be some excitement aboard the orbiting complex before the three new spaceflyers arrive. SpaceX's robotic Dragon capsule is due to launch May 7 on a mission to become the first commercial cargo craft to visit the station.

If all goes well, Dragon will berth with the orbiting lab, offload about 1,150 pounds (521 kilograms) of cargo and take on roughly the same amount of material for the trip back to Earth.

The flight is a demonstration mission, to see if Dragon and SpaceX's Falcon 9 rocket have the right stuff to begin making bona fide supply runs to the station. SpaceX holds a $1.6 billion contract with NASA for 12 such robotic cargo flights, and the first could launch later this year if the May 7 demo goes well, SpaceX officials have said.

Burbank won't be aboard for Dragon's historic berthing, if it happens. While the astronaut has enjoyed his time in space, he said he's ready to rejoin the rest of us on planet Earth.

"Although I will miss this place and this crew, I also am very happy to return home to my family," Burbank said. "It is time for Expedition 30 to step aside and make way for Expedition 31."