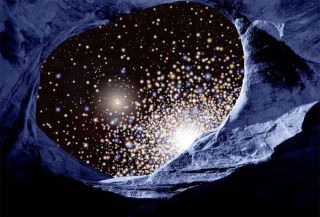 Imagined view of the sky from a planet near a globular cluster of stars. The sun is thought to have formed in a star cluster around 4.5 billion years ago.
(Image: © David A. Aguilar (Harvard-Smithsonian Center for Astrophysics))

Some scientists are searching not just for any life out there in the universe, but for our distant relatives.

Earth may have seeded life on other planets if an asteroid smacking into Earth sprayed DNA into space, researchers suggest. Now a team of researchers is searching for siblings of the sun — stars born from the same parent star cluster — whose planets could have been impregnated with Earth life this way.

The sun is thought to have formed around 4.5 billion years ago within a cluster of thousands of baby stars. After around 1 billion years, this cluster broke up and the sibling stars went their separate ways. But before that point, researchers say, some of these stars may have shared life in the form of bacteria or DNA molecules.

"The idea is if a planet has life, like Earth, and if you hit it with an asteroid, it will create debris, some of which will escape into space," said astronomer Mauri Valtonen of the University of Turku in Finland. "And if the debris is big enough, like 1 meter across, it can shield life inside from radiation, and that life can survive inside for millions of years until that debris lands somewhere. If it happens to land on a planet with suitable conditions, life can start there." [Gallery: The Smallest Alien Planets]

That means that somewhere out there in the galaxy might be your long-lost cousin.

If such a process ever happened, it was probably while the sun was still in its birth cluster, near enough to other stars that the chances were not negligible that debris bearing samples of Earth microorganisms might smash into another planet.

During the time of the birth cluster, objects in the solar system were under heavy bombardment by comets and asteroids, so researchers say material could have been fairly easily transferred between planets.

Research suggests it's equally possible that Earth itself was seeded with life in such a manner, though neither scenario is considered likely.

To pursue the idea, Valtonen is searching for these sibling stars of the sun.

In a recent study, he analyzed a catalog called HIPPARCOS that recorded the positions and motions of more than 100,000 stars. Picking out those stars with radial velocities known to be similar to the sun's, Valtonen and his colleagues identified two promising stars, called HIP 87382 and HIP 47399, that also had the same metal content and were at the same evolutionary stage as the sun. According to the researchers' analysis, there are a few percentage points of probability that these two were born in the same cluster as our sun. Both are about 100 light-years from Earth now.

Valtonen said the next step would be to search for planets around these candidate stars.

"If we find an Earth-type planet, then it'd be a nice target for this new generation of detectors to point at the atmosphere of the planet," Valtonen told SPACE.com. "If there's a planet and it has signs of life, then we could say perhaps they are relatives in some sense."

Valtonen presented his findings earlier this year at the 219th meeting of the American Astronomical Society, in Austin, Texas.