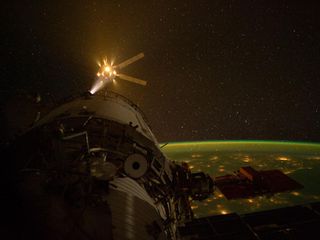 Astronauts aboard the International Space Station captured an extraordinary photo of an unmanned European cargo ship as it docked to the orbiting outpost last week.

The robotic ATV vehicles are designed to automatically dock to the space station. In this photo, the ATV-3 is approaching its parking spot at the Zvezda service module on the Russian segment of the orbiting complex.

The photo shows the ATV-3's distinctive x-wing solar arrays bathed in light from the spacecraft's sophisticated laser guidance system. The starry night sky and the glow of lights from Earth below make up the remarkable backdrop, as the two vehicles fly 240 miles (386 kilometers) above the planet.

American astronaut Don Pettit shared a version of the docking photo on Twitter the following day.

The cylindrical spacecraft is 35 feet (10.7 meters) long and 14.7 feet (4.5 meters) wide. The 13-ton cargo freighter is disposable and will remain attached to the space station for up to six months before it is loaded with garbage and sent to deliberately burn up as it re-enters Earth's atmosphere.

While NASA reported a power issue on the ATV-3 last weekend and a communications glitch on Thursday (April 5), both issues have since been resolved, and all systems are functioning normally, agency officials confirmed.

The European ATV vehicles are typically named after prominent historical figures in astronomy or space exploration. The ATV-3 is named "Edoardo Amaldi," after the famed Italian physicist who helped create the European Space Agency.