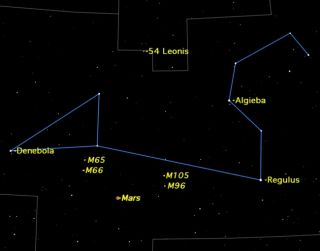 UPDATE: See our latest skywatching tips to see Mars at opposition here: Mars Visible in Night Sky, But Its 2 Moons Are Hard to Spot

Of all the planets, Mars seems to be the one that holds the greatest fascination for mankind, and the Red Planet is poised to dazzle skywatchers this week.

In many ways, Mars is similar to Earth: solid ground, something of an atmosphere, plains, mountains and valleys. It even has weather: clouds and dust storms.

Mars is the only planet with a clearly visible surface and, as such, has been studied by astronomers for hundreds of years. This study has become more intensive and accurate in recent years, thanks to several satellites orbiting the Red Planet, and several unmanned visits to the surface of Mars by robotic explorers.

The next two months offer the best opportunity for skywatchers to study Mars for the next two years. Because of their orbits, Mars and Earth have close encounters only once every 26 months. The next encounter is coming up this week.

On Saturday (March 3), Mars will be in opposition to the Earth. This is essentially a geometric event: Mars will appear exactly opposite the sun in Earth's sky, 180 degrees away from it.

The sky map of Mars for this story shows how the Red Planet will appear in the night sky.

It's reasonable to think that Mars will also be closest to Earth on this date, but the planet has a trick up its sleeve. While Earth's orbit is almost a perfect circle, Mars' orbit is an ellipse with enough of a bulge that the planet actually comes closest to Earth two days later, on Monday (March 5). [Amazing Mars Photos]

On that date, Mars will be about 62.6 million miles (100.7 million kilometers) away from Earth, which will be almost twice as far away as it was on the Red Planet's last favorable opposition, on Aug. 30, 2003.

This year, Mars will come into opposition with the constellation Leo as a backdrop. Even though this is an unfavorable opposition because of how far away Mars will be, the planet will still be bright enough to outshine all the stars in this part of the sky.

Mars will be impossible to miss, even in the brightest city skies. Other than its brightness, Mars should appear a pale red color to the naked eye. It will shine with a steady light, quite different from the twinkling of the nearby bright star Regulus.

Because Mars is in opposition to the sun, it will rise in the east at about the same time as the sun sets in the west on Saturday. Look for it in the east about an hour after sunset.

As the Earth rotates, Mars will appear to slowly rise upwards and to the right. By midnight, it will be due south, and about halfway up the sky. By dawn, Mars will be setting in the west as the sun rises in the east.

If you plan to do some skywatching this weekend, let Mars also help you discover the constellation that forms its backdrop: Leo the Lion.

This constellation is made up of two distinct parts. On the left, above Mars, is a rather ordinary right-angled triangle of stars that are about the same brightness as the stars of the Big Dipper, with the star Denebola at the far left. On the right is a sickle, or perhaps a backwards question mark, with the bright star Regulus as the dot of the question mark. Regulus is a wide and extremely bright double star and should be easy to spot with binoculars.

The leftmost star in the question mark is Algieba, one of the finest double stars in the sky. This makes a beautiful sight in any small skywatching telescope with at least a 3-inch (75 mm) aperture. Double star observers will also want to look for the star 54 Leonis, which will be about halfway between the northern tips of the question mark and the triangle.

Deep sky observers will find many bright galaxies in the constellation of Leo. The sky map with this story shows four of the brightest, all of them bearing numbers from Charles Messier's catalog.

In a 6-inch (150 mm) telescope, M65 and M66 form two-thirds of the "Leo Triplet," along with a third galaxy, NGC3628. These are among the brightest galaxies in the sky, and are even visible in light-polluted city skies, if you know exactly where to look. M96 and M105 are also part of a triplet, joined by M95. Though not as bright as the M65-M66-NGC3628 triplet, they are still a fine sight in dark sky.