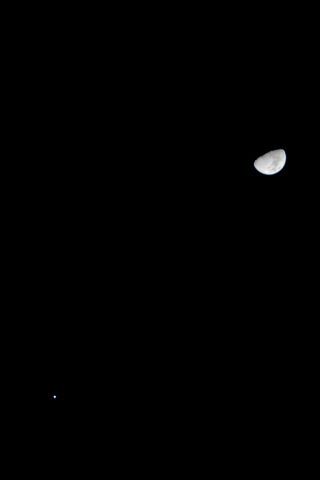 Astrophotographer Douglas Keck of Bella Vista, Arkansas, says he put two exposures from January 2, 2012, together in Photoshop to make this image of the moon and Jupiter.
(Image: © Douglas Keck)

It's always fun to look up at the night sky and try to spot the planets, and this year, there will be plenty of opportunities to look for the celestial bodies in our solar system.

Here are some tips on how you can try to see the planets in 2012:

Mercury is often a difficult planet to find, but there are certain short periods each year when it can be seen with the naked eye with little effort, either just after sunset or before sunrise.

Southern Hemisphere observers will find Mercury well placed in the morning sky during mid-April, and in the evening sky in late October.

2012 is an excellent year for observing Venus. It spends the first half of the year in the evening sky and the second half of the year in the morning sky. On June 6 (June 5 in the North America) Venus transits the face of the Sun for the second and last time this century; the next transit of Venus will be in 2117. This transit will be visible, at least in part, over most of the world except for western and southern Africa, most of South America, Antarctica, and much of the Atlantic Ocean. The entire transit will be visible in eastern Asia, eastern Australia, Alaska, the Yukon, and northern British Columbia.

Mars will be well placed for observation from mid-January through the end of April, opposition being on March 3. It will actually be closest to Earth two days later on March 5: 62,621,333 miles (100,779,266 km) distant. This is an unfavorable opposition because Mars is close to aphelion, as far from the Sun as it ever gets. Mars spends the first half of the year in a retrograde loop in or near the constellation Leo, before resuming its journey eastward along the ecliptic.

Jupiter spends the first half of the year in Aries, and the second half in Taurus. It is best viewed in the evening in the for the first three months of the year, and then in the morning sky from July until the December 3 opposition, when it moves into the evening sky for the rest of the year. The angular diameter at opposition will be 48.4 arc seconds. Binoculars will show the four largest satellites. A small telescope will show one or two cloud bands across the visible surface of the planet.

Saturn will spend most of the year in Virgo, moving into Libra on December 6. Saturn can be viewed in the morning sky until April 15, when it moves into the evening sky. From September to November it will be behind the Sun, reappearing in December in the morning sky. The rings are now widely open, making them easy to see in any telescope magnifying more than about 30x. Saturn’s largest moon Titan is readily visible in a small telescope, and several more moons may be seen in larger telescopes. At opposition, the planet’s angular diameter will be 19.1 arc seconds.

Uranus spends most of 2012 in Pisces, except for an incursion into the northwest corner of Cetus from May 11 to September 16, after which it returns to the western part of Pisces. It is best viewed in fall. It is in opposition on September 29, when it moves from the morning sky into the evening sky. Although it may be seen with the naked eye in a very dark sky, usually binoculars will be required to make it out. Its angular diameter is less than 4 arcseconds.

Neptune spends the whole of 2012 in Aquarius. It is best viewed during the late summer and early fall. It is in opposition on August 24, when it moves from the morning sky into the evening sky. Binoculars or a small telescope will be required to see it. The angular diameter is about 2 arcseconds.