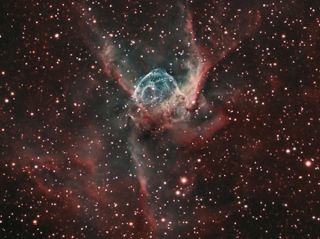 Multiple exposures are made to collect enough light for an image that would otherwise not be evident to the eye.
(Image: © Bill Snyder)

Snyder took the image in June 2011 from his home observatory in Connellsville, Penn., and recently provided it to SPACE.com. Multiple exposures are made to collect enough light for an image that would otherwise not be evident to the eye.

The emission nebula lies in Canis Major, about 15,000 light-years away from Earth. A light-year is the distance light travels in one year, or about 6 trillion miles (10 trillion kilometers).

Fierce stellar winds and intense radiation from a nearby star created the bubble-like shape of the nebula. This star, known as a Wolf-Rayet, is thought to be in a pre-supernova stage and likely has a mass 10 to 20 times that of the sun. The winds from this star create the shell of the glowing nebula. It has a blue-green hue due to the oxygen atoms in the gas.