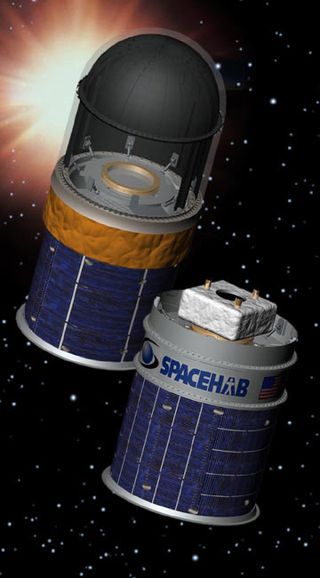 Spacehab's 100 Series Apex spacecraft, seen here in an artist's rendition, is expected to carry smaller payloads of up to 380 kilograms into space.
(Image: © Spacehab.)

It takesall kinds of spacecraft to reach orbit and a NASA contractor is working to buildthree more.

Houston,Texas-based Spacehab, known for its laboratory modules and other hardware thatride aboard NASA's space shuttles, is developing a trio of ever-larger vehiclesto make up its Apex spacecraft family.

Spacehabengineers are currently hammering out specifications for their Apex 100, 300and 400 series spacecraft, which they hope will provide a flexible range ofservices for spaceflight customers and attract NASA's eye for space stationresupply. Current plans call only for unmanned craft, but a human-rated versioncould be developed later if the market warrants it, they said.

"If thatemerging market comes to bear, then we would have a system that has cut itsteeth on unmanned flight," Spacehab's Apex program manager Jim Baker told SPACE.com,adding that an Apex spacecraft could be modified for manned operations ifrequired. "We'll have proven its guidance, navigation...and recovery operations."

Theaerospace firm built a spare parts stowage platform for the International SpaceStation (ISS), which Discovery's STS-114 astronaut crew delivered to theorbital laboratory during their July-August spaceflight. Spacehab officialsannounced their Apex plans in conjunction with that flight.

WhileSpacehab engineers are starting small and working their way up, all of theirApex vehicles are expected to come in recoverable - in which payloads return toEarth - and non-recoverable varieties.

Thesmallest Apex vehicle, the 100 series, is currently expected to carry no morethan 836 pounds (380 kilograms) in orbit on a one-way flight, though it couldreturn a 572-pound (260-kilogram) payload back to Earth, Apex planners said.

While the100-series Apex could launch atop a Falcon 1, Minotaur or Taurus booster, amid-size version - the 300 series - would rely on a larger rocket, such asBoeing's Delta 2, according to Spacehab's mission plan.

"Ourconcept is to fly on existing or emerging vehicles," Baker said. "That gives usthe ability to shift from one [launch] provider to another, so should any oneof the vehicles have a failure, we'll still have access to space."

Undercurrent plans, Spacehab's Apex 300 spacecraft would carry a maximum orbitalload of about 8,818 pounds (4,000 kilograms), though smaller payloads of up to4,850 pounds (2,200 kilograms) could be returned to Earth on recoverableflights.

Spacehab'sApex 400 series tops the spacecraft family's payload charts, with specificationcalling for loads up to 27,000 pounds (12,300 kilograms) for one-way flightsand 18,959 pounds (8,600 kilograms) for returnable flights. The spacecraftcould launch atop an Atlas 5 or Delta 4 rocket, Spacehab officials said.

"Strategically,it's vital that we have a broad base," Spacehab president and CEO MichaelKearney told SPACE.com, adding that growing interest in private spacecommerce is bringing the industry to a head. "We need to have a new vehicle...wewant to be right there on that frontier."

With NASA'splan to retireits three remaining space shuttles by 2010, Spacehab and other private spaceflightfirms are hoping to snag resupply rights for the ISS.

"To takewhat we've learned working with the shuttle and then remove our dependabilityon the shuttle, that seemed like a natural progression," Baker said of the Apexeffort.

At a spaceconference earlier this year, NASA chief Michael Griffin said he hoped the spaceagency could purchase ISS resupply flights from commercial providers in thefuture. Private firms such as SpaceX, SpaceDevand TransformationalSpace (t/Space) among others have already expressed an interest.

"Peopletend to look at the spacecraft part of this, but there's much more," Kearneysaid, adding that he believes Spacehab's experience and existing infrastructure- such as clean rooms for hardware preparation - will prove vital assets indeveloping the Apex program.

Bakerpointed out that space catering, in addition to satellite deployment and ISSresupply, may be an avenue Apex spacecraft could explore.