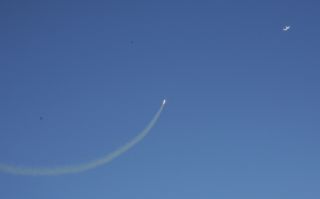 The futurelooks bright for civilian suborbital spaceflight, with a host of private firmsdeveloping spacecraft to carry anyone with a willing heart and a robust bankaccount on the ultimate trip.

One yearafter the history-making suborbital space shot of SpaceShipOne, commercialspaceflight efforts continue to make headway through government regulation andtechnological hurdles, each with its eye on the space tourism market.

On June 21,2004, the privately-built SpaceShipOnedropped from its White Knight mothership above the Mojave Desert and rocketedinto history as the first civilian-funded spacecraft to reach suborbital spacewith a human pilot at the helm.

"I'm stillconfident we will get there this year," Virgin Galactic president WillWhitehorn told SPACE.com. "Suborbital space tourism will prove thatgovernments don't need to stand behind us in order to reach space."

An annualcelebration based on the efforts spurred by the Ansari X Prize, the X Prize Cup,plans to hold its first exhibition event in October 2005.

Among the moreproven manned commercial launch concepts is Virgin Galactic's vision of VSSEnterprise and four other spacecraft that will round out its fleet ofsuborbital passenger carriers.

"Thefundamental technology doesn't change at all," Whitehorn said of going fromSpaceShipOne to a commercial tourist-dependent business. "And over five years,we hope to get that price down to $50,000 or so."

"It will beour north star," Whitehorn said of passenger safety, adding that he plans toride aboard the final test flight of VSS Enterprise before its inaugurallaunch. "I think one of the biggest risks to commercial spaceflight is thatsomeone somewhere out there decides to launch before they're ready."

Arlington, Virginia-basedSpace Adventures also has a tried and true method of launch paying customersinto space, though the price tag is admittedly much more than a Virgin Galacticflight.

SpaceAdventures has helped broker orbital flights aboard Soyuz spacecraft and the InternationalSpace Station (ISS) for two entrepreneurs, Dennis Tito and Mark Shuttleworth,who each reportedly paid about $20 million for their trips. A fresh candidatefor an ISS trip, New Jersey optics entrepreneur GregOlsen, is currently training for his own spaceflight to the ISS, though anexact launch date has not yet been set.

"We haveborrowed as much as possible for our design," Sheerin said in a telephone interview."But there're modern materials and modern concepts that we have applied...all theaerodynamics are the same [as the original V2] but we'll save huge amounts ofmoney on materials."

"I'massembling a very official organization here," Sheerin said, adding thatsuborbital tourist flights may be only the beginning. "If we do it right, we'llhave this extraordinary space tourist organization."

TheCanadian Arrow firm has already conducted a series of successful engine testsand hopes to integrated, captive engine firings by the end of summer. The firstlaunch pad tests will shakedownthe rocket's escape tower system - borrowed from a similar NASA system used inthe U.S. space Agency's space capsules - in which rockets pull the CanadianArrow crew capsule safely away from its booster and land with parachutes.

Othersuborbital efforts underway include AERA Corp., with its research center basedin Temecula, New Mexico. The firm has said it should have its first launchvehicle ready for flight by fall 2006. Five vehicles are projected to be readyin the first year of production, with six more to follow the next year.

Some groupshoping to stake their claim in the commercial spaceflight market have more thansuborbital flights in mind.

The studyis part of SpaceDev's plan to develop Dream Chaser, a reusable six-person spaceplanewith a hybrid rocket engine. Based on NASA's X-34 program, Dream Chaser'scurrent incarnation is that of an orbital spacecraft, though initial planscalled for a suborbital version.

"We'vechanged our focus from suborbital to orbital," explained Jim Benson, SpaceDevCEO founding chairman, in a telephone interview. "By designing for an orbitalvehicle, we get the side benefit of having a suborbital flight capability."

Benson saidthat the push by Virgin Galactic into the commercial suborbital business andNASA's evident need for a successor to the space shuttle, which is due to retireby 2010, were behind the orbital shift. He hopes SpaceDev's Dream Chaser, whichcould make its first suborbital manned flight by 2008, could be ready in timeto be considered as a potential launch vehicle for NASA.

"NASA needsto reduce its own risk by giving the smaller, non-traditional contractors achance," Benson said. "If all the eggs are put into the giant contractorbasket, something will probably come out, but it will be a lot more expensive."