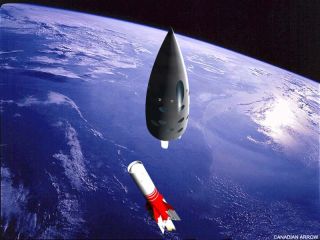 After separation from its booster, the Canadian Arrow cabin is oriented to provide the best window view for the passengers in this artist's interpretation.
(Image: © CANADIAN ARROW.)

The road tospace for a Canadian spaceship is a bit shorter now that its rocketeer team hasfound a suitable launch site.

The Ontario-basedfirm PLANETSPACE/CanadianArrow announced today that it has chosen a military base near Cape Rich, just off Georgian Bay, as the proving ground for its manned suborbital spacecraft.

"It's about 70 square kilometers (44 square miles), so it's a huge area," said Canadian Arrow leader GeoffSheerin of the test site. "There's a potential that we could fly there a long time into the future."

Sheerin said Meaford Range officials have agreed to allow Canadian Arrow use of the base's facilities on a need basis for upcoming tests, though the project will need to receive authorization from the Canadiantransportation agency Transport Canada before any test flights can occur. Engine firings atop a capture test stand should aid in that process, but must wait until the completion of anenvironmental review for Canadian Arrow's planned test site near Barrie, Ontario, he added.

"You need to make sure that you're not going to do any harm," Sheerin said, adding thatthe environmental study could be completed in the next 30 days.

The Meaford Range, and Cape Rich especially, are prime spots for private space launch because ofits restricted airspace and waterways stretching 2.5 miles out into Georgian Bay.

"Becauseit's at a point, it's similar to being out on a barge," Sheerin said.

PLANETSPACE/CanadianArrow hopes to begin manned launch operations by 2007 and has recruited a teamof test astronauts to pilot the spacecraft. The initial tests at Meaford willfocus on the launch system's escape tower, which is designed to pull the mannedcapsule free from its booster in the event of an emergency.

"The escapesystem is something we want to get to maximum reliability," Sheerin said."We'll fly it about four or five times."

Originally acontender in the Ansari X Prize competition to build and launch reusable,manned spacecraft on suborbital flights, Sheerin's Canadian Arrow teaminitially planned to launch its three-seater rocket from a barge on one of the Great Lakes.

The plancalled for the suborbital space capsule and its V2 rocket-based booster toparachute back into the water where recovery crews would retrieve them. Otherpotential launch sites near Port Stanley on Lake Erie and the Sarnia regionnear Lake Michigan would have required a barge before any tests could take place,Sheerin said.

"We haven'tcompletely discarded the barge idea," Sheerin said. "But [Meaford] saves us alot of time in preparations."

CanadianArrow is the second private space firm to choose a launch site in Canada. The Toronto-based da Vinci Project, also an X Prize team, selectedthe town of Kindersley in Saskatchewan to stage its balloon-launched suborbitalspaceflights in 2003.

Meanwhile,aerospace veteran Burt Rutan and his firm Scaled Composites launchedthe manned spacecraft SpaceShipOne on three suborbital flights staged fromMojave, California in 2004. Other efforts with launch sites in hand include thespace tourism firm AERACorp., which plans to use Cape Canaveral Air Force Station as the startingpoint for its Altairis passenger spacecraft, and Rocketplane Limited, Inc.,which hopes to set its Oklahoma Spaceport at BurnsFlat.