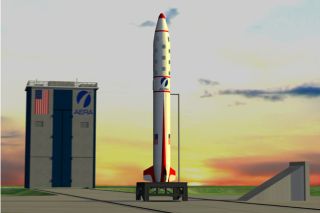 A private space tourism firm withplans to launch civilians on suborbital joyrides has pinned down its launch padwith a little help from the U.S. Air Force (USAF).

"It was essential to put [it] inplace very early in our process," said Lewis Reynolds, AERA president and chiefoperating officer, of the launch site during a telephone interview. "And thefacilities there are essentially the best available the world."

AERA's agreement with USAF, renewableafter five years, allows the company access to the Air Force Station' launchfacilities and support facilities as a base for Altairis,six-passenger spacecraft currently slated to begin test flights - and possiblya commercial spaceflight - in the fall of 2006.

But even with a launch site in hand,AERA Corp. still faces major challenges ahead to make its spaceflight goals.While the company has funding from venture capitalists, plans for a spacecraftproduction facility are still being finalized. Commercial spaceflightregulation hurdles and hiring needs are also a challenge.

"We know it's a bold goal, but webelieve it to be obtainable and we are going to keep pressing forward,"Reynolds said. "Our survival and long-term goals depend on our ability to dothis safely and cost-efficiently."

Reynolds said the Altairis spacecraft is an evolved version of a vehicledesigned by Bill Sprague - AERA founder and CEO - while he led his AmericanAstronautics team during the Ansari X Prizecompetition.

The current design calls for avertical launch spacecraft that would then make a horizontal landing. AERAplans to unveil its Altairis design in spring 2005during an event in New York City,company officials said.

Passenger launches would includepre-flight training and a 40-minute ride, according to AERA'swebsite.

"We'll initially enter the marketwith five spacecraft, and then follow in the first year with another six," Reynolds said of AERA's current plans.

Since the spacecraft itself isdesigned to be computer-controlled, a series of unmanned spaceflights areplanned before the first passenger launch, he added.

The $10 million X Prize contest -won last year after two successful flights by the privately-developedspacecraft SpaceShipOne - challenged civilians to build and launcha reusable sub-orbital vehicle capable of carrying the mass of three people tothe edge of space and back.

However, to date only one privateeffort - SpaceShipOne designed by aerospace veteranBurt Rutan and financed by millionaire Paul Allen -has managed to not only to produce a working spaceship, but successfully flymanned sub-orbital spaceflights three separate times, two of them within twoweeks of each other to nab the X Prize.

Meanwhile, the Oklahoma-based firm Rocketplane, Limited has announced its intentionsto rollout its sub-orbital spacecraft Rocketplane XPfrom Burns Flat - possibly in mid-2006 - with the first passenger flightsfollowing a year later at around $150,000 a ride. XCOR Aerospace has set thepassenger ticket price for its Xerus spacecraft atabout $98,000.

Still other homegrown commercialspaceflight efforts, including Canada'sseparate Canadian Arrow and da Vinci projects, aswell as U.S.efforts by firms like Armadillo Aerospace and Space Transport Corp. amongothers, are working to build their own human-carrying spacecraft. In 2006, XPrize officials are preparing to hold the X Prize Cupin Las Cruces, New Mexico.

A 2002 report by the market researchgroup Futron Corp. reported that by 2021, 15,000space tourists could be seeking sub-orbital flight tickets.