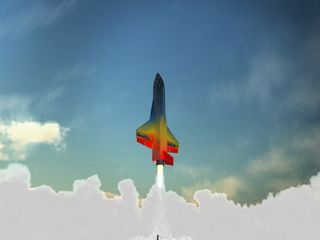 An artist's illustration of the vertical launch for SpaceDev Dream Chaser, a reuseable, human-carrying spacecraft under development by the Poway, California-based firm SpaceDev.
(Image: © SpaceDev.)

The aerospace firm SpaceDev cast its hat into the ring of private human spaceflight today, announcing its plans to build a reuseable spacecraft that may one day carry passengers into orbit.

Based in Poway, California, SpaceDev is designing a piloted sub-orbital spacecraft that could eventually be scaled up for orbital flights. The effort springs from a partnership between SpaceDev and NASA's Ames Research Center in Mountain View, California to explore hybrid propulsion-based hypersonic testbeds for routine human spaceflight.

"We have tried to make it clear that SpaceDev does have plans of our own in terms of human spaceflight, both orbital and suborbital," said Jim Benson, the firm's founding chairman and CEO, in a telephone interview.

Benson said the SpaceDev Dream Chaser, as the vehicle is known, could make its maiden flight by 2008 if it is fully funded. The project is currently a partially funded effort, he added.

The spacecraft is expected to carry at least three humans, but possibly more, to an altitude of 100 miles (160 kilometers) using a hybrid rocket engine under a vertical launch profile.

"I am delighted that we will be working with SpaceDev to help meet the goals of the vision for space exploration," said NASA Ames director G. Scott Hubbard in a statement. "Near-term, low-cost, crewed and uncrewed routine space access is a key for realizing the nation's exploration vision."

SpaceDev is currently looking into a number of X-plane designs pioneered by NASA engineers, though the agency's X-34 space plane concept shows promise, Benson said. NASA's X-34 program, shut down in 2001, was a project to develop a reuseable, unmanned suborbital spacecraft.

The company envisions three primary markets for their spacecraft, which include commercial space transportation consumers, civil agencies such as NASA and the military.

"The time is right for space, both in general and for the public," Benson said, adding that he has been waiting 50 years for commercial spaceflight to become a reality and made it a target when he founded SpaceDev in 1997. "There are a lot of people who have been waiting since their childhood for space to really take off."

A track record in space

SpaceDev is no stranger to private spaceflight enterprises, having provided crucial components and refueling services for the hybrid rocket engine used by SpaceShipOne, an entry in the international Ansari X Prize competition. The firm also built the small CHIPsat satellite for researchers at the University of California at Berkeley.

"It's probably going to take three versions to get an orbital vehicle," Benson said, adding that an intermediate vehicle would follow the initial spacecraft, which could then lead to an orbital ship. "We're going to take this one step at a time."